We know, it’s surreal and bizarre. But there you go: the fact remains that a Connecticut state trooper and motorist reported a U.F.O.  in Litchfield, Connecticut Wednesday night. The story was even picked up by the staid and decidedly non-U.F.O. friendly Associated Press. The following mysterious event remains unexplained as of late Thursday:

… [A] person driving in Litchfield at about 2 a.m. Tuesday reported that a green, glowing object the size of a whale fell from the sky and crashed into Bantam Lake. Officials say that at about the same time, a state trooper 10 miles away in Warren called dispatchers to report that something fell out of the sky and landed near Bantam or Morris.

One of the witnesses reportedly said the object was “whale-sized.” Morris-based searchers trolled Bantam Lake trying to find some sign of a plane crash or perhaps wrinkled, gray alien bodies, but had no luck. The search was called off late Thursday, leaving behind conspiracy theories for the ages as well as hours of scintillating discussion on very late night radio talk shows.

For those desperately searching for a rational explanation for such high strangeness, New Hampshire’s WTNH TV may offer a bit of succor, noting that that the National Weather Service reported a meteor shower late Wednesday. The Lyrid Meteor Shower is expected to peak around April 21-22, but may cause similar mischief from now until then.

So there is your likely logical scientific explanation. We leave it to Sufjan Stevens to take on the more ephemeral aspects of U.F.O. sightings in his jaunty hat, which seems appropriate. 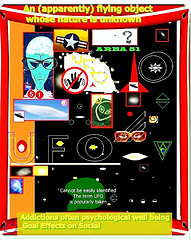