Forced to clean up his act, Mr. Huang threw himself into his schoolwork, winning departmental awards in African-American and feminist studies, and trying his hand at sports journalism, penning an article on the Malice at the Palace for the Orlando Sentinal.

After the piece ran, Mr. Huang said, an editor called him in to interview for a job as a basketball beat writer. “The first thing the guy said to me was: ‘Oh, no one’s gonna talk to you with that face.’ Those exact words. Not, ‘Hi, hello.’ And he caught himself: ‘No, not like that—your age.'”

In early 2005, Mr. Huang enrolled in law school at Cardozo in Manhattan. While there, he maintained a number of side-jobs: He printed his own tees and hawked them online. He became friendly with 50 Cent affiliate and G-Unit member DJ Whoo-Kid, and began promoting parties for him. He took freelance writing jobs with XXL, Rotowire, NBA.com, and Law.com. He also continued selling marijuana, though “not, like, serious weight,” he noted.

In September 2008, Mr. Huang was hired as an associate at white-shoe law firm Chadbourne and Park. The economy tanked immediately thereafter. On March 10, 2009, on what Mr. Huang described as “one of the best days of my life,” he was laid off. He tried his hand at stand-up comedy, hosting open mic nights, but soon sensed he wasn’t gaining traction. What did seem to be winning him fans was the food he often brought along for club owners and fellow comics.

After answering a Craigslist post, he landed a spot on the Guy Fieri-hosted Ultimate Recipe Showdown. He lost the competition, but by the time he went home for the holidays in 2009, plans for Baohaus were well underway.

Mr. Huang’s parents, already unhappy with their son’s rudderless streak, offered no financial help with the restaurant. The relationship worsened when Eddie managed to get Evan—then a single semester away from graduating college in Orlando—to join him in his new endeavor. “‘My parents hated Eddie for a while,” Evan laughed. “They thought he was going to ruin my future.”

But Baohaus was a hit. So much so that barely half a year later, Mr. Huang decided to open another restaurant on the Lower East Side, Xiao Ye, in July 2010. Whereas Baohaus was a tiny, counter-based quick-serve restaurant, Xiao Ye typified the middle-class family restaurants his parents had run. Without the family part.

In it, Sam Sifton slammed Xiao Ye as an “artful misfire,” calling the food “dishonest” and finishing things off with a goose-egg. The review also noted the potential the place had “if Mr. Huang spent even a third of the time cooking that he does writing funny blog posts.”

Oftentimes, restaurant owners respond to a bad review by taking up arms in the press against the critic in question. Mr. Huang took a different tack: wholeheartedly agreeing with Mr. Sifton, and posting a hysterically withering email from his mother, encouraging him to keep his law license active so he could potentially go back to being a lawyer.

“YOU MUST GET BURNT BEFORE YOU WILL HEAR YOUR MOM,” she wrote. “You have a lot of potential, but you must make good choice and stick to it with the best choice. With all the staff, and your korean friend, no one was able to point out or warn you the mistakes, or problems you have???????????????????”

“I didn’t want to do shitty food on purpose,” he explained. “I wanted to just wild out, and do really dumb shit in an artful way.”

He added that part of the original vision was that “customers could come in every night and know that it was going to be fun.” That part, he definitely managed. That summer, a caffeinated malt liquor drink called Four Loko began to gain popularity. Senator Charles Schumer launched a war on the beverage, and Mr. Huang saw an opening. He changed his Twitter handle to “General Loko” and instituted an all-you-can-drink Four Loko dinner. After the plan was deemed illicit, he tacked on $3 per can charge. According to his tweets the morning after, the dinner was a great success.

But that night, the State Liquor Authority raided Xiao Ye and destroyed all the Four Loko. Over the next few weeks, the restaurant was raided by the SLA on three separate occasions after citations for serving underage drinkers (in the form of undercover SLA agents). Under threat of losing his liquor license—which would have made selling the space more difficult—Mr. Huang and his partners shut Xiao Ye down.

Reflecting on the failure, Evan is philosophical. “Xiao Ye was definitely Eddie trying to prove something,” he said. “And he didn’t fully prove it, but he learned a lot.”

IN JULY, a second Baohaus was opened on 14th Street. On a recent Friday night, a line snaked around the door as Ol’ Dirty Bastard’s “Shimmy Shimmy Ya” pumped through the restaurant.

Mr. Huang has collaborated on a few one-off Chinese New Year’s dinners, one of which received a glowing review from Mr. Sifton. Plans to open other Baohaus locations are in the works. And the book deal—which Eddie considers the best thing he’s ever done with his life—has been signed.

Though he eventually wants to open another sit-down restaurant, he noted, “I don’t have a plan. I hope people don’t get upset that cooking is just one thing that I’m into.”

Just a few weeks after our lunch, Mr. Huang was sitting in the lobby of the Museum of Chinese in America, having delivered a speech on the topic of whether Asians are black or not. Later, sitting with The Observer in the lobby, he was still mulling over the contract from the Cooking Channel.

He wanted success, but at what price? After all, it was the unfiltered Eddie Huang—self-destructive fuck-up, unlikely feminist, reluctant chef, crack-up, class clown and social equality advocate—who got him so far in the first place. Would those ingredients work any other preparation but his own?

A few days later, he made it clear where he stood, while DJing music on an Internet radio station. “My next song is for Anne Burrell and Guy Fieri,” he wrote, tweeting out the link to a YouTube page. Those who clicked through found a G-Unit video: “I Smell Pussy.”

The contract has yet to be signed, and negotiations are still ongoing.

During our interview, Mr. Huang recalled the posters he put up in his room as a child: Basketball players like Allen Iverson and Charles Barkley.

“There were no posters I could buy of Asian people besides Bruce Lee. And—I mean, no one’s ever going to put up a poster of me, but I hope that, to some kid”—he paused, looking up. “I get emails from Asian kids, and it means the world to me, that they’re like: Yo man, you’re doing your thing, you’re saying what I want to say, and you make me feel like I can walk around with my head up.

“People have sent me emails like that,” he grinned. “I won.”

*Editor’s Note: In October 2012, Eddie Huang’s show—Fresh Off The Boat—was announced by VICE Media. The planned show with the Cooking Channel and Scripps never materialized. 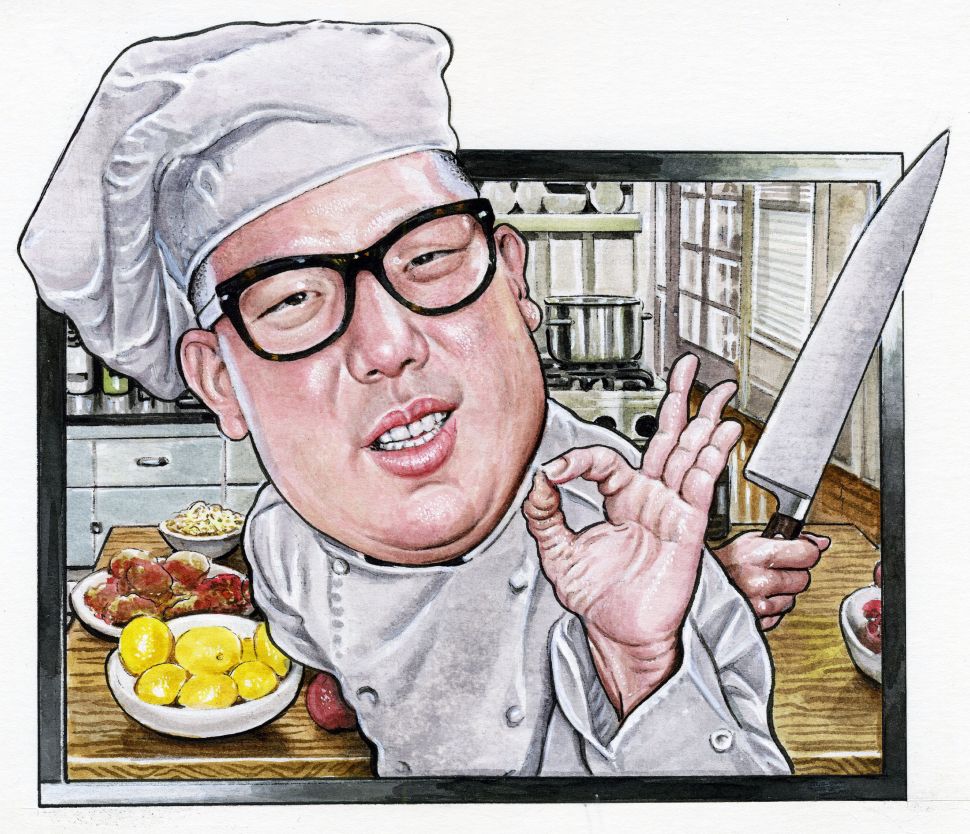