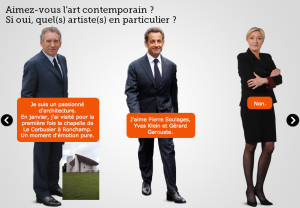 French newspaper Le Figaro asked France’s presidential candidates Francois Bayrou, Nicolas Sarkozy and Marine Le Pen some questions about their tastes in art. We couldn’t help but be piqued by some of their views, such as Marine Le Pen’s clear, confident answer to the question, Do you like contemporary art? “Non.”

Francois Bayrou made a clever parry with, “I’m passionate about architecture.”

Mr. Sarkozy responded to that same question with nationalist pride, “I like Pierre Soulages, Yves Klein and Gerard Garouste.” This made us laugh as we remembered one of Mr. Sarkozy’s prior encounters with Yves Klein where he expressed his appreciation of an artwork by the artist that consisted of a monochrome orange square, as described by Philip Gourevitch in The New Yorker, as follows, “‘That costs millions.’ Then he expressed his wonder: ‘Is a Klein more than a Léger? Less than a Matisse?’ His remarks prompted groans of dismayed mockery in the press.”

When asked what work of art most shocked them, Mr. Bayrou responded, “I don’t like to be provoked,” Mr. Sarkozy responded, “nothing shocks me” and Ms. Le Pen responded, “Piss Christ by Serrano.”