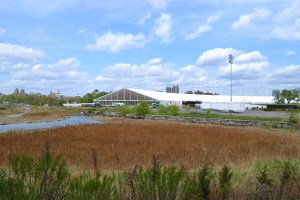 The Frieze tent being constructed. (Photo by Andrew Russeth)

Up until the announcement last spring that London’s Frieze Art Fair would be coming to New York for the first time, there were maybe five main reasons for a person to be on Randall’s Island: You are a high school student on an organized sports team—probably lacrosse or track or, perhaps, soccer—and you are utilizing the island’s athletic fields for practice; you have tickets to Electric Zoo or Cirque du Soleil; you like golf, but you do not want to leave the city to play it; you are a patient at the Manhattan Psychiatric Center on the adjoining Wards Island; you are John McEnroe, it is 2010 and you are inaugurating the John McEnroe Tennis Academy at the Sportime Randall’s Island Tennis Center.

Frieze, which runs May 4-7, is now on New York’s home turf, but Randall’s Island feels a long way from Chelsea, or even the Upper East Side, even though that neighborhood is connected to the island by the Wards Island Footbridge, which is sea foam green, intriguingly Art Deco and, somewhat inconveniently for Frieze, closed for construction until later this summer.

There’s something ever so slightly off about the island. During a visit there last week, I saw high school students jogging past patients from the psychiatric center who were out for an afternoon walk accompanied by attendants. For every sign that says “Golf Center,” there’s one that says “Neurochemistry.” That attractive white brick, Roman-style building over by where the island connects to Queens? It turned out to be a sewage treatment plant. From Harlem, I walked across the RFK Bridge, which deposited me behind the driving range in a tangle of barbed-wire fencing beneath the shadow of the overpass. There were rust-covered dumpsters, old bleachers, unattached snowplows and more dumpsters. The Frieze tent, glossy and bright and snaking along the Harlem River, is located at the end of a service road. I’d come out to Randall’s Island in part to catch a glimpse of the Frieze tent while it was under construction, but also just to figure out how one gets there. I’ve lived in New York for seven years and, like a lot of New Yorkers, I’ve never had any cause to go to Randall’s Island.

I was also looking for a rat. Before going out to the island, I saw that The Art Newspaper’s website published a photograph of a giant inflatable rat, a symbol of union protests, installed at the Frieze tent’s construction site. The week before my trip, the New York District Council of Carpenters—an organization used by New York’s other major fairs, the Armory Show and the ADAA Art Show—announced a labor dispute with Frieze. The fair, so they claimed, was not using any of the local signatory contractors that employ the council. Not long after that, members of Occupy Wall Street announced a plan for a protest in front of the fair because, as Noah Fischer, one of the founders of Occupy Museums told me, “Frieze is a sort of hyper commercialized spectacle for the art economy” (the group also staged a small protest in front of the Armory Show, in March). Frieze denied that it was in a labor dispute with anyone. So what accounted for the photo of the rat?

Usually, when a New York art dealer has to cross water to get to an art fair, it’s because they’re in Basel. Or Paris, strolling along the Pont Alexandre III to the Grand Palais, for FIAC. There’s something almost more exotic about an island no one goes to in the East River with a giant asylum sitting in the middle of it.

“What we tend to do when we’re involved in a local New York fair is not going to work,” said dealer Jane Cohan, who runs the James Cohan Gallery with her husband, when I called her the day after my trip. “We tend to split our days. We figure there’s more people in New York and more people coming to the gallery and we want to be there for that. But with Frieze that’s not going to work logistically. It’s going to be a longer trip. We’ll have to come up with a different rotating system of sales associates.”

“I went out there yesterday on foot,” I said.

“Really?” she said. “Across the Triboro Bridge? That must have been an experience. I once walked across the George Washington Bridge but it was 4 in the morning and I was 17. Somehow, I don’t think a lot of our clients are going to do that.”

Chances are the Horts and Rubells of the world will probably not be walking across any bridges. Holders of the fanciest of Frieze’s VIP tickets—the one that gets you in at 11 a.m.—will have access to BMW sedans that will shuttle them from the island to wherever in Manhattan they need to go. Each car is equipped with sound installations by Martin Creed, Rick Moody and Frances Stark, which a press release from BMW boasts “will make the journey to Randall’s Island more enchanting.” (Reading this made me think of the empty vial covered in cocaine residue that I saw on the ground while walking across the bridge.) A Frieze spokesperson told me a ride from the BMW fleet will probably have to be booked in advance.

As a journalist, my own VIP card gets me in only as early as 2 p.m. Frieze will be running its own bus from the 4,5,6 train stop at 125th Street in Harlem, as well as a ferry that leaves every 15 minutes from East 35th Street. The other option is to take the M35 bus, which is basically a shuttle from Harlem. I took it on a second trip last week. With the exception of the guy sitting next to me who kept nodding off on my shoulder, it wasn’t an unpleasant ride. Still, it’s amusing to imagine Larry Gagosian—or even most art journalists—in a fit of desperation taking public transportation.

“I’m wondering at what point people will raise enough of a fuss that they’ll have to start having helicopter shuttles from Chelsea to the island,” said Alex Provan, a founder of Triple Canopy who will have a booth at Frieze. It’s the organization’s first art fair and it was given a booth for free because of its nonprofit status (as was White Columns; the Occupy Museums people weren’t aware of this when I spoke to them. One of them responded angrily, “We don’t think these small gestures work,” and then didn’t really elaborate.) Mr. Provan, whose organization doesn’t have the financial resources of a commercial gallery, said, “Hopefully most of the dealers that can afford to do Frieze can afford cab fare.”

“Helicopter,” the dealer Andrew Kreps responded quickly when I asked him how he was getting out to the island. He was joking, but I bet we can expect a lot of Frieze-related helicopter jokes in the coming weeks. I can think of more than a few art world machers who would likely consider it the most practical mode of transport, given that the island is a little too close to Teterboro to get to by private jet, never mind the lack of runway. “It’s hard to believe,” Mr. Kreps continued, “but I’ve actually been there before. For like a weird camp reunion thing. A touch football kind of deal. It’s really not that hard, I know people might think that sounds crazy. You just go up the FDR and you go over a bridge and you’re there. I know it’s intimidating, but it’s actually a pretty amazing place.”

Bridget Donahue, a director at Gavin Brown’s enterprise, reiterated this point to me when she said “I think since we’re all New Yorkers, we’re just assuming we’ll get in a yellow cab.” As far as I can tell, most cabs have less of a problem going to Randall’s Island than they do to, say, Brooklyn, so long as you agree to pay the $6.50 bridge toll. But Oliver Newton, co-owner of the gallery 47 Canal—who is one of the lucky exhibitors with his own car—conjured a truly horrifying image: “What worries me is the situation at the end of the fair, when everyone is trying to leave at once.”  Then again, that nightmare scenario may be mitigated by people like dealer James Fuentes, who lives downtown near the East River and plans to take his bike.

For now, getting on and off the island is relatively painless. On Tuesday a group of around 20 journalists got on a yellow water taxi at 35th Street with Frieze cofounders Amanda Sharp and Matthew Slotover. Tea was served, and everyone headed for the top deck and started snapping photos of Manhattan. “I really like this trip,” Ms. Sharp said to me as we passed the Upper East Side. “It’s very seductive.” When we arrived at the construction site, security guards made us put on neon-yellow vests that said FRIEZE ART FAIR. Mine didn’t really fit over my jacket.

Last week on one of my trips out there, after scouring the art fair grounds looking to no avail for the inflatable rat, I found myself waiting at the bus stop near the parking lot (this is as good a time as any to say that the lot fits about 1,500 cars). The bus comes roughly four times an hour in the afternoon. A yellow cab with its light on pulled up instead and stopped. I looked around, hesitated slightly, and then jumped in.

“Do you take a lot of fares to Randall’s Island?” I asked the driver.

“Things happen,” he said coldly. “You take a lot of cabs from bus stations on Randall’s Island?” That was the end of that conversation. The cab back to Midtown took 20 minutes and cost $25.92, with a 20 percent tip.

As for the inflatable rat, it turns out that by the time I got there it was long gone. I found out later from a Council of Carpenters representative that the protest symbol was basically a photo-op, installed for a few hours and swiftly taken down after someone called security. There weren’t a lot of people around to see it anyway.