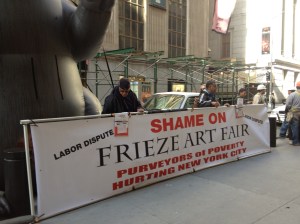 A letter sent Thursday by the New York City District Council of Carpenters to Deutsche Bank, the main sponsor of Frieze Art Fair, announced a labor dispute between the organization and the London fair that is preparing for its inaugural year in New York. It was sent to us as well. The letter claimed that Frieze is using contractors who “do not pay the area standard wages to all their employees including providing or fully paying for health benefits and pension.”

Frieze responded to Gallerist‘s request for comment on Friday morning with the following statement:

Frieze is aware of the letter sent by the New York City District Council of Carpenters and would like to reassure everyone that we are not in a labor dispute with them or any other collective bargaining organization. Frieze has a track record of producing high-quality art fairs and has contracted reputable local vendors with the appropriate skills and experience to prepare the Randall’s Island site for the upcoming art fair. In our inaugural edition of Frieze New York, we aim to make a positive cultural and economic contribution to the City by creating the best art fair experience for our participating galleries and the public.

Brian Brady, a representative for the District Council of Carpenters also returned Gallerist‘s call on Friday morning. He told us the Council has 23,000 members, a bulk of which are commercial carpenters in the city. None of them, he said, are working on the Frieze installation on Randall’s Island, which is happening now. He said the organization has tried to reach out to Frieze–both by phone and by visiting Randall’s Island in person–to no avail.

“They have the mentality that instead of using the contractors that work in the city and employ members of the organization that I represent, they would not go through the signatory contractors that have been used for the past 50 or 60 years in New York City,” Mr. Brady said.

Mr. Brady said he was not aware of any plans to picket Frieze Art Fair when it opens on Randall’s Island May 4.