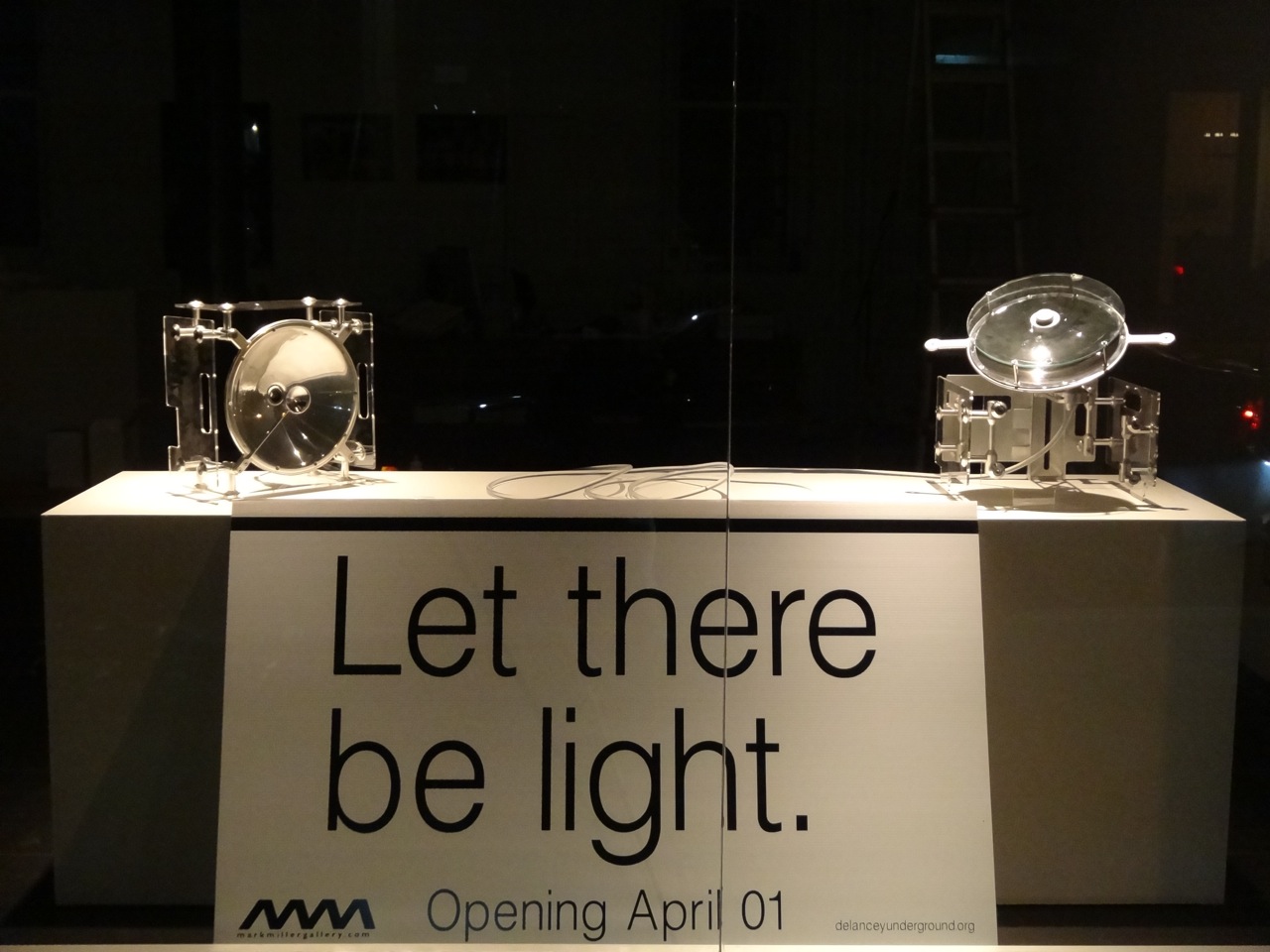 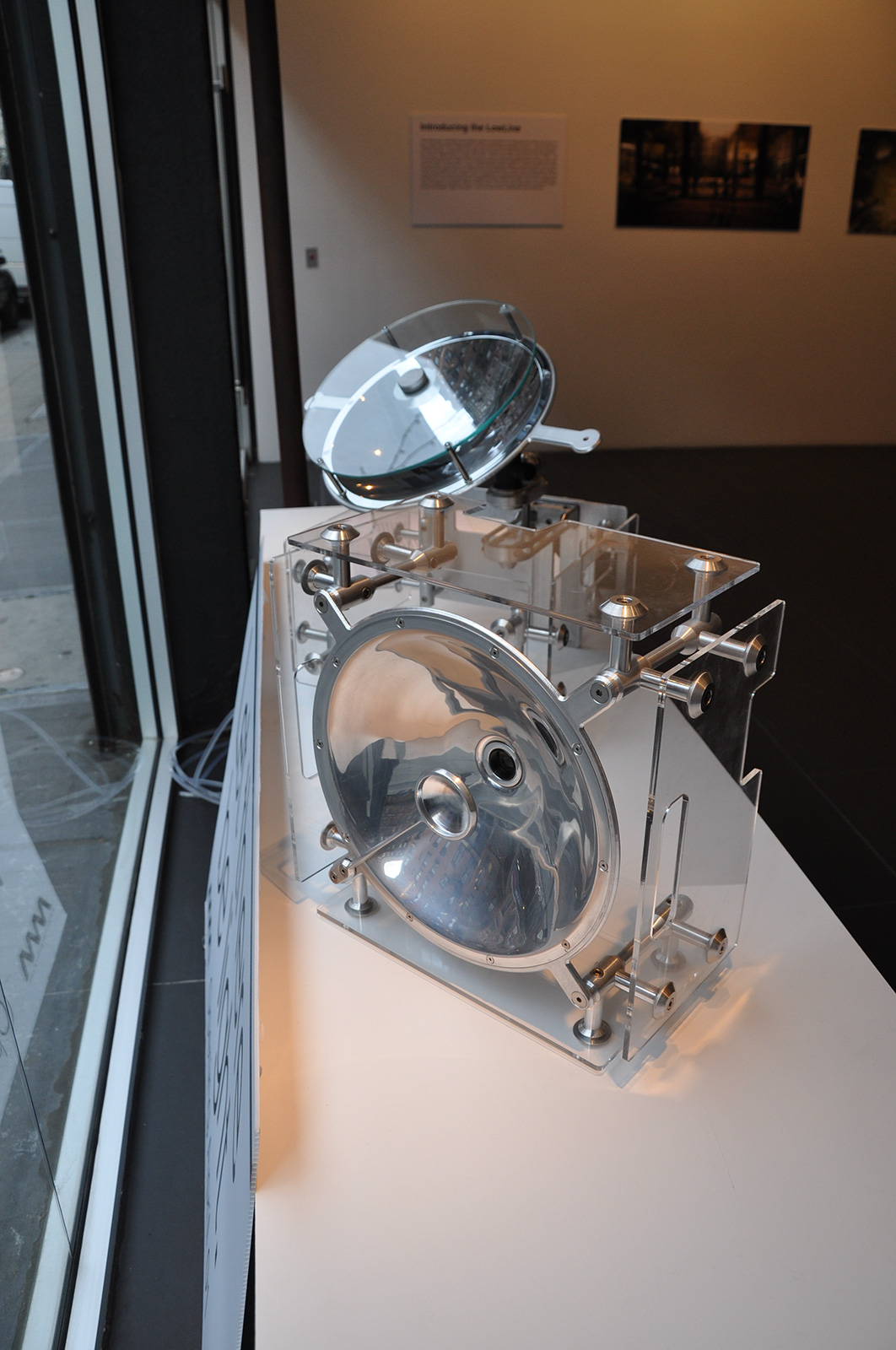 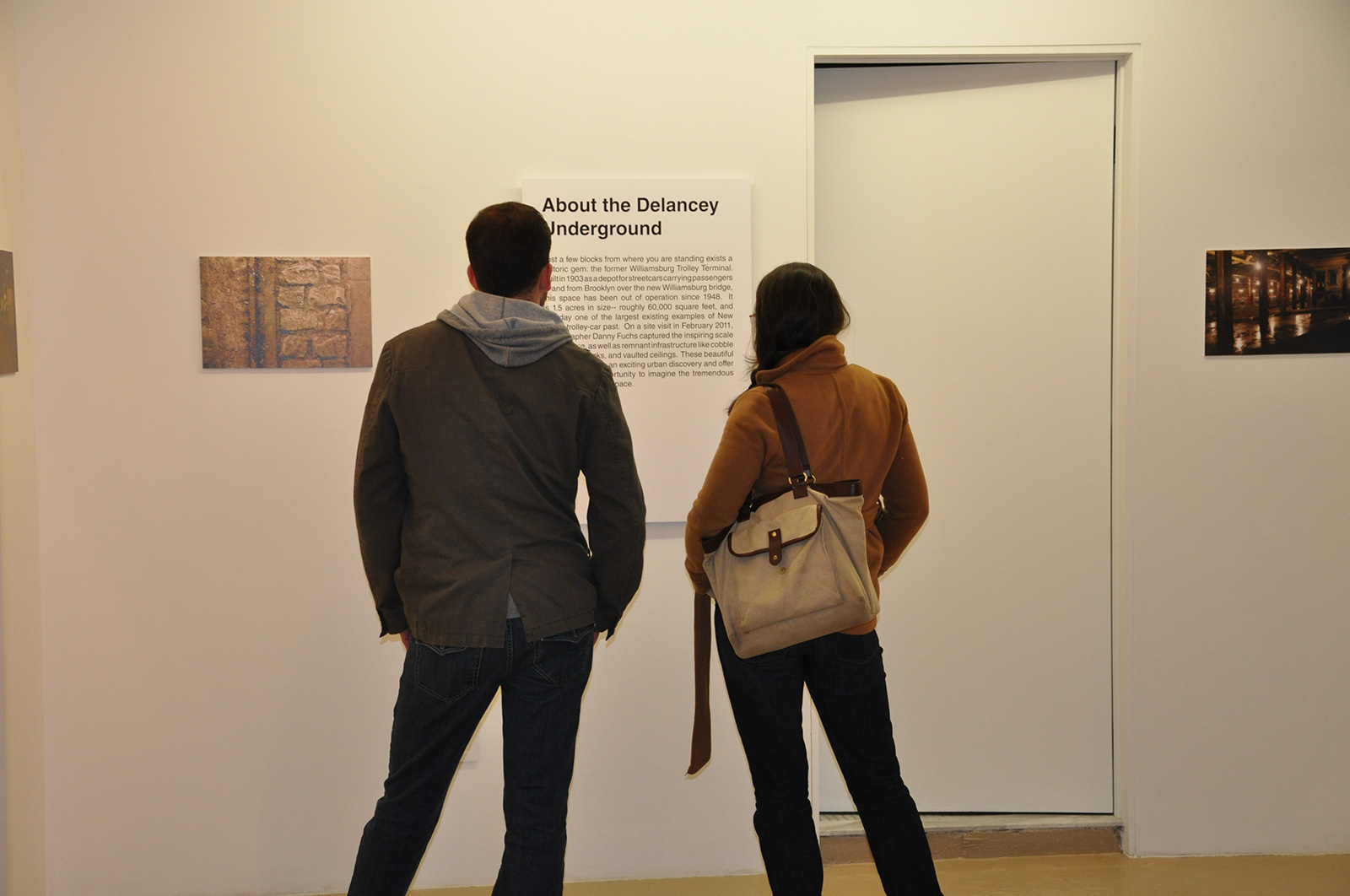 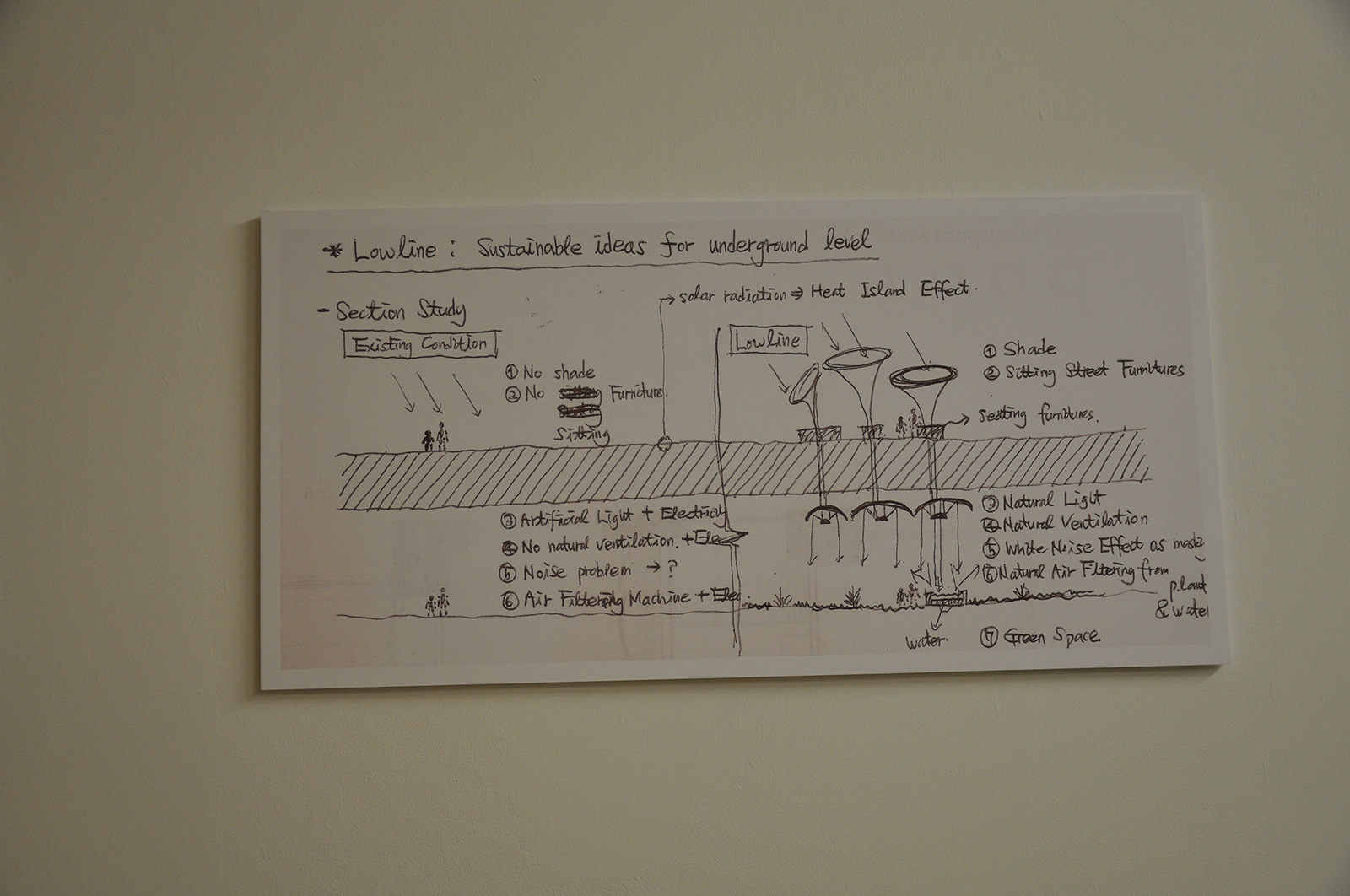 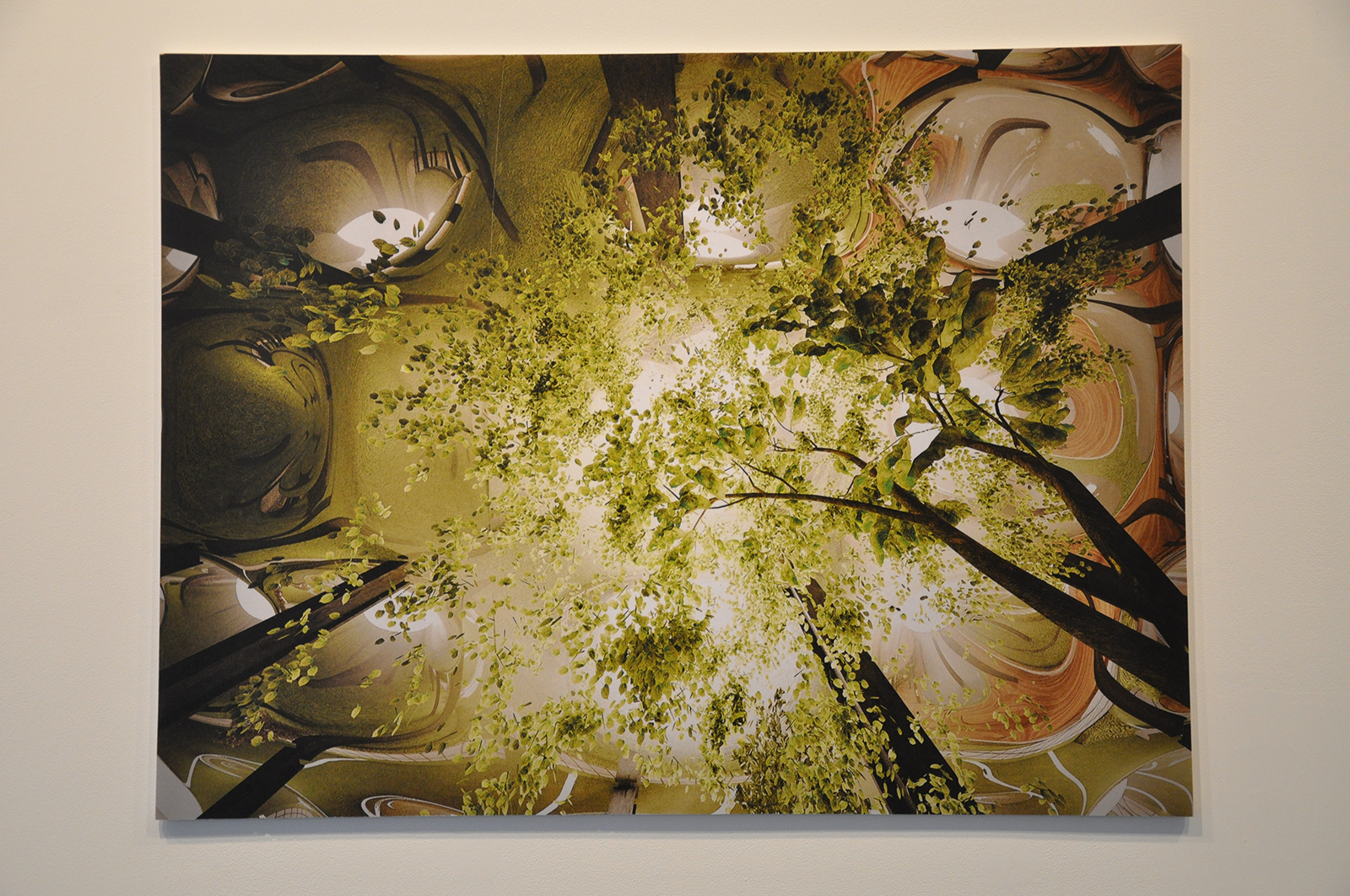 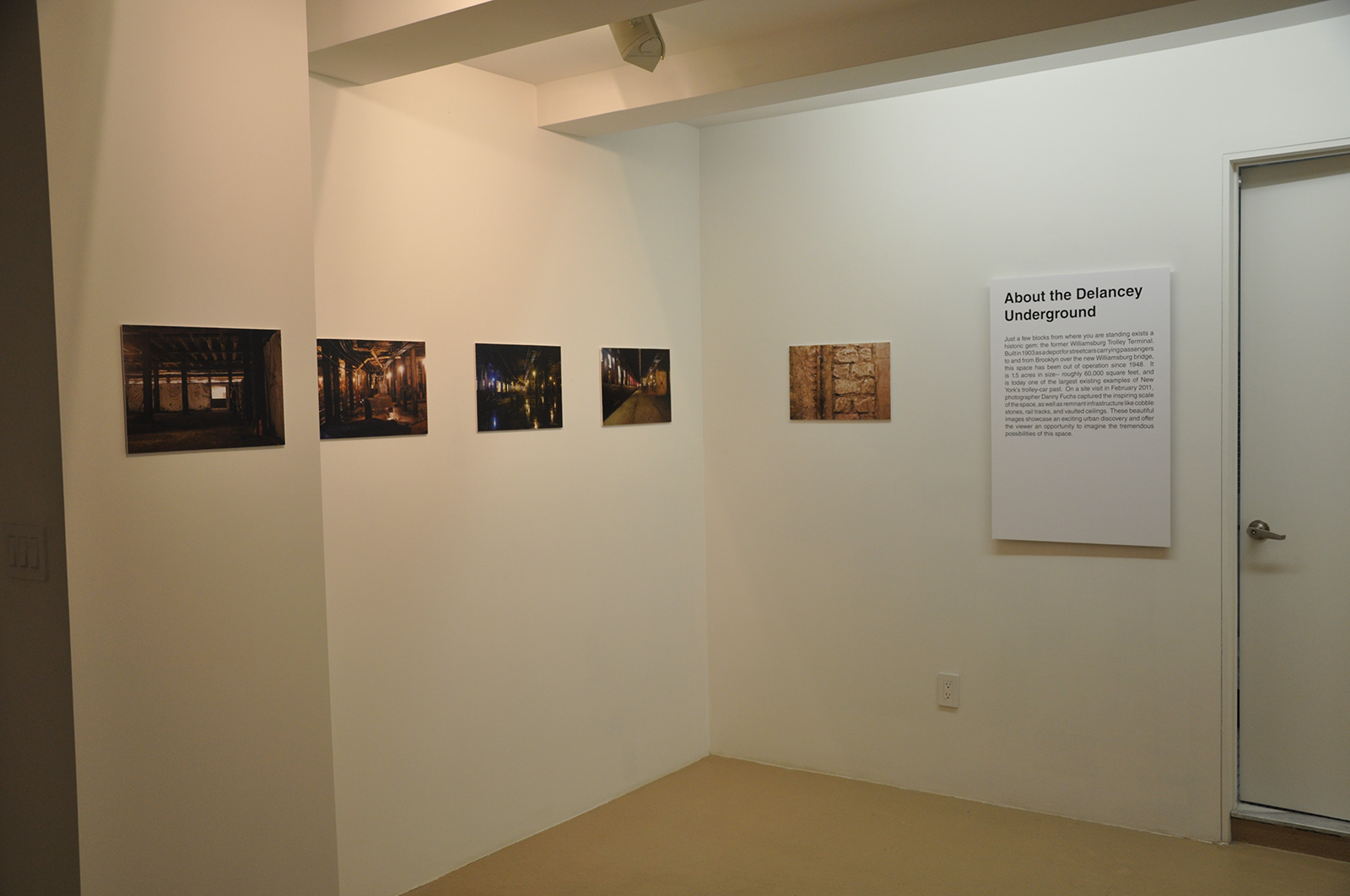 Photos of the current state of the Delancey Underground. [Ethan Ries]
jhanasobserver 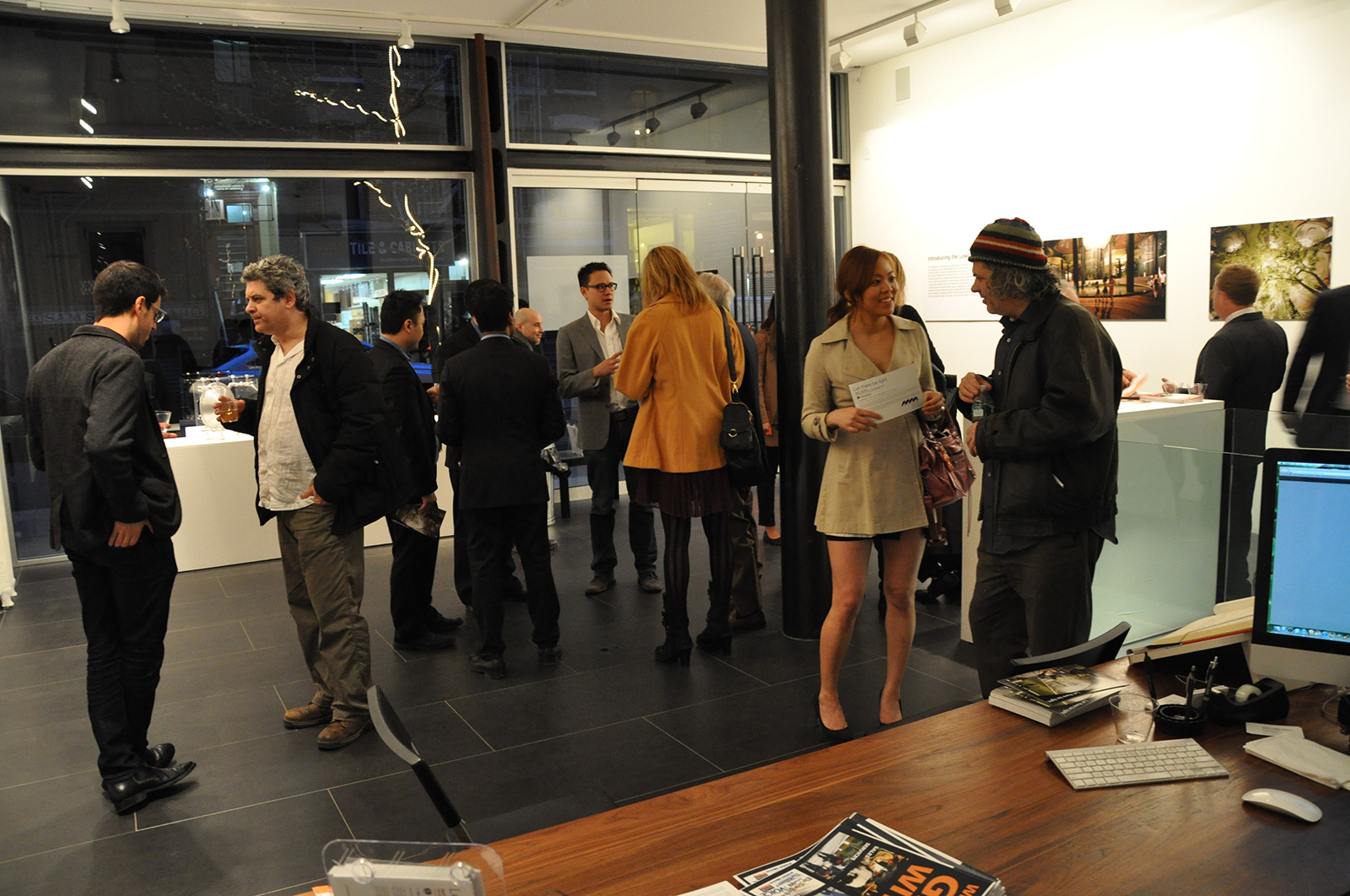 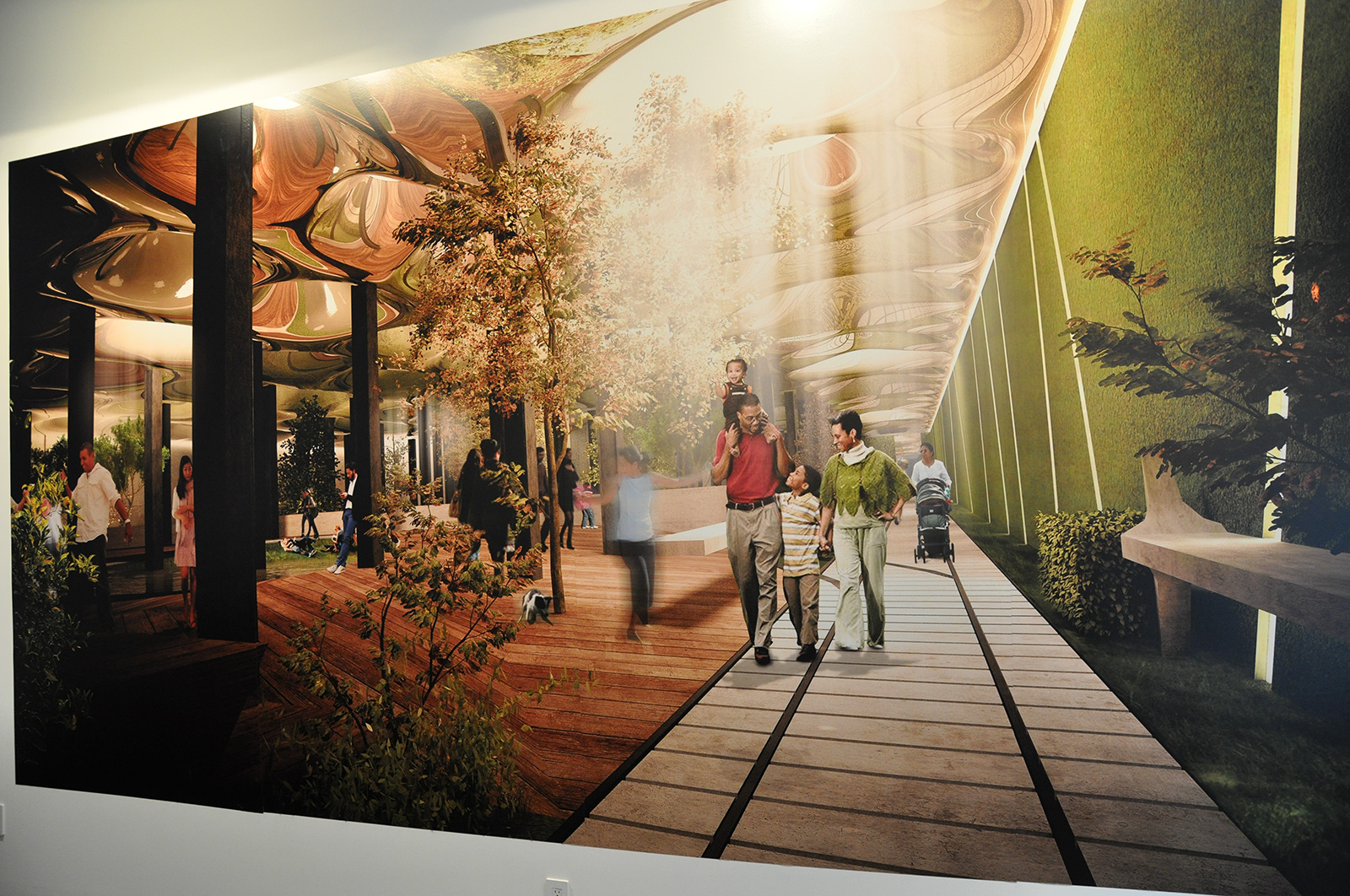 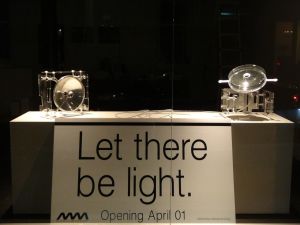 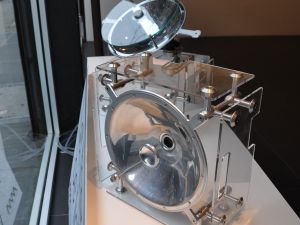 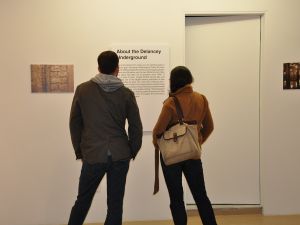 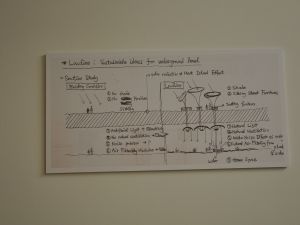 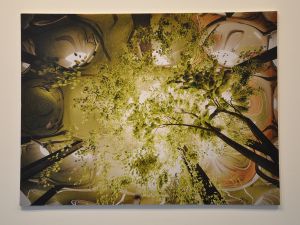 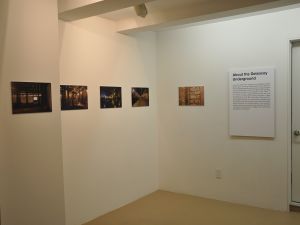 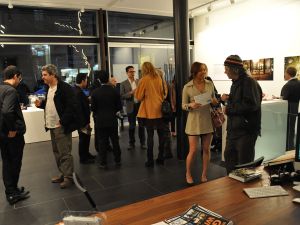 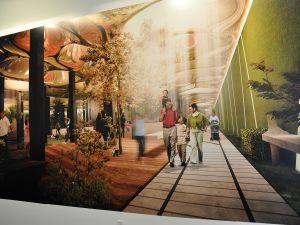 On Sunday, April 1, the white walls of Mark Miller Gallery on Orchard Street were covered with renderings of the imagined possibilities of the Low Line, a much-talked-about plan for an underground park in an abandoned trolley turnaround station below Delancey Street that will be lit by solar technology, if its creators can make it happen. The exhibit, which opened that night, also included a three-dimensional model of a cross section below Delancey Street, and a rather intimidating example of that fiber-optic solar technology.

The show, “Let There Be Light,” is a collaboration between gallery owner Mark Miller and partners Dan Barasch and James Ramsey, who dreamed up the Low Line, which is something of a LES companion—or rejoinder—to Chelsea’s much-loved High Line. The two men are at work garnering support at the moment.

“This project at its heart has a fantasy element, and I think the images that we’ve put out so far have captured people’s imaginations,” said Mr. Ramsey, an architect. “We’re proposing a landmark that’s getting people to dream a little bit.”

Mr. Barasch estimates that it will cost $20 million to convert the 60,000-foot underground space into a park, although he and Mr. Ramsey are still working, through research analysis and collaboration with experts, like Cambridge-based engineering company ARUP, toward pinning down a more exact number.

The pair brought their project to the Lower East Side Business Improvement District, where they met Mr. Miller, who serves as its president. The exhibition was the dealer’s idea, and will include prints of the artwork for sale as a fundraising effort.

“I went after them!” Mr. Miller said. “I see the potential in this.”

The exhibition, which is on view through April 29, is as much about reaching out to the local  community as it is about showing off the aesthetic appeal of the park. The creators are all aware of how long a project like this can take, especially as they look back upon the tedious process that was the funding and construction of the High Line, which has cost $152 million so far—the final section, at the West Side Rail Yards, is still under construction.

“It’s absolutely essential to us that we maintain people’s excitement levels,” said Mr. Ramsey, “and we’ve constructed an outline of how we want to accomplish that, with a series of public events and displays to engage people, and to make this something that’s exciting in a sustained way. This gallery exhibit is just one small portion of it.”

Mr. Miller, who is preoccupied with the park’s practical applications and economic value for the community, held a special reception for area merchants and property owners before the exhibit’s official opening.

“I’m assuming the park would be free and open to the public,” the dealer said, “so there would have to be some kind of commercial activity going on down there.”

Mr. Miller is an interesting mix of pragmatist and dreamer. He’s filled with idealistic enthusiasm, and although none of his plans for the future of the park have been set in stone (his sentences often began, “It would be cool if…”), he may bring the park success from the sheer number of his ideas. In a way, he’s predicting problems (what happens when it isn’t sunny? how will maintenance costs be covered?) before they develop into actual setbacks.

“It has to be more than an underground park,” he said. “I’m for an entertainment area, a place for theater or fashion shows. And if it rains? No problem!”

Mr. Ramsey is looking to whip up local support. “That particular pocket of the LES, despite the fact that it’s one of the richest cultural landmarks in America, it’s been historically overlooked by planners, and as a result it has a paucity of open green space,” he said. “So I think that creating something like this, which is both a public space and a landmark, is something for residents to find useful and to be proud of.”

The creators have been plugging the potential boost for businesses, the much-needed green space and the role of the park as a cultural landmark as the major selling points in their community meetings. Along with the Lower East Side BID, they’ve spoken to Community Board 3 and the Tenement Museum, which they hope will collaborate on an educational component of the park, given the site’s rich history.

“I think that they are very respectful of the community,” said Dominic Pisciotta, head of Community Board 3, “and they are really trying to make sure that there’s support for it, which is a smart thing to do. There are definitely projects where people don’t even think of talking to the community.”

Nearly every major development project in the city has had to deal with at least minor opposition, but if such a group exists for the Low Line, it isn’t active—perhaps because the organizers have been so thorough in their outreach (though they haven’t spoken with the mole people), or because it still doesn’t feel like a definite possibility.

Community Board 3 has not yet endorsed the project, and Mr. Pisciotta doesn’t have the unbridled enthusiasm of Mr. Miller, but he did admit to being intrigued, and noticed that much of the community seemed to be as well. “The feeling on the board is that before we take a position, we want to see if it’s technically feasible,” he said. “There was definitely a supportive sentiment in the room, but we just want to feel things out a little more.”

All involved acknowledged that the park would be a big change, a shiny emblem of modern technology and innovation in a neighborhood that holds much of its intrigue in its connections to the past. Dan Barasch, who was with communications company PopTech before he quit his job to work full time on the Low Line, is convinced that the final development plans for the park would be better if, like the High Line and perhaps to an even greater degree, they maintained both the personality and the historical significance of the space.

“There’re all these historical remnants in the architecture,” he said of the underground space. “There are cobblestones, rail tracks, elevated ceilings and the places on the ceiling where the trolleys were attached. Then there’s graffiti and all this other evidence that the place has been abandoned for 60 years. We’re thinking about how all of that can be brought into the future, together with the solar technology.”

That technology, which on its surface seems bombastic to the point of science fiction (sunlight underground?), combined with a lively park atmosphere, may very well attract droves of  visitors to the area, boosting retail businesses.

Mr. Miller has been promoting tourism as a major benefit to the project, both for the Lower East Side and for New York as a whole. “I could see people getting on a plane from Europe, staying in a hotel and spending money, all to see this new underground park,” he said.

But if the Lower East Side becomes another Times Square, residents will not be happy.

“Tourism wasn’t discussed in depth at the meeting, but people questioned what type of visitors this would bring, and would this be something that would serve the community, or would it be such a huge destination that it would crowd it out,” said Mr. Pisciotta. “It could change the community in ways we can’t yet foresee.”

Another organization that has yet to be convinced, and needs to be, is the MTA, which owns the space, and is under contractual obligation to generate the highest possible value for their real estate.

He mentioned the 2nd Avenue subway and the other infrastructure projects that the MTA brags about in their subway ads as evidence that the organization has too many other things to think about to be working on the Low Line project when it’s at such an early stage. The creators will not be asking the MTA for funding, but they will return to them to ask for endorsement once they’ve finalized their plan, which consists of assessing legal and feasibility issues, as well as courting partnerships, corporate supporters, private donors, and a leadership team that can allow them to move forward with development.