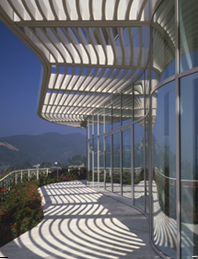 With their “Pacific Standard Time” initiative nearing its end, the Getty Foundation and the Getty Research Institute are spearheading a similar, though more modest, exhibition series to open in April, 2013, focused on architecture and urban planning in Southern California.

The Getty Center in Los Angeles will present a survey exhibition, “Overdrive: L.A. Constructs the Future, 1940-1990,” while seven institutions, including the Museum of Contemporary Art and the Hammer Museum, will present simultaneous shows related to the urban landscape of L.A. and the surrounding cities following World War II.

“Basically it’s a smaller ‘PST,’” Thomas Gaehtgens, the director of Getty Research Institute, told The Observer at a press briefing at Michael’s restaurant this afternoon.

“It’s hard for New Yorkers to understand, because they don’t consider L.A. to be a city which is planned,” he added. “We also have some problems understanding the sprawl.” The exhibition, in other words, will not be only about buildings.

There will be drawings from Frank Lloyd Wright and Frank Gehry, but also a look at the less glamorous side of L.A. “The freeways, the malls, the parking lots,” Mr. Gaetghens added. “All of these hubs have their different centers and different conversations.”

The Getty is also providing grants to seven institutions, ranging from $135,000 to $200,000, for research and planning related exhibitions, including a monographic show of A. Quincy Jones at the Hammer, an exhibition of young architects working in Frank Gehry’s shadow at MoCA and “Fin-De-Sixties Los Angeles: From Pop to Postmodern” at the MAK Center in West Hollywood.

Contemporary artists will also be asked to create new work that will respond to the exhibitions. The Getty is currently in talks with Thomas Demand and Ed Ruscha. Mr. Ruscha, known for his documentation of the urban landscape of Los Angeles and beyond, will have his own exhibition opening on the same day, “In Focus: Ed Ruscha.” The show will present images acquired by the Getty Museum in 2011, both iconic as well as previously unpublished works, that relate to and illuminate Mr. Ruscha’s process as undertaken for several of his books like Twentysix Gasoline Stations (1963) and Some Los Angeles Apartments (1965).