In which the voices of their generations (or two voices…of two generations) discuss The World’s Most Important Show, seeking common ground on the series’ hot-button issues. Like that stuff that comes up around the sides, etc.

Gen X: This deal between Hannah and Adam, help me out. Is this like the “fuck buddy” thing I have heard so much about? Or is it Friends with Benefits? Or is it maybe the famed NSA?

Gen Y: Isn’t that the government? They are friends with benefits, I think that’s pretty clear. Or no. Fuck buddies. That’s what we call them, because they aren’t friends.

Gen Y: They don’t move in the same social circle, so they are fuck buddies. That is the definitive word on their relationship until he asks her to marry him. (SPOILER ALERT?)

Gen X: Ha. So this is a real thing you kids do? I’m intrigued. How does such a relationship work? I just really want to understand…

Gen Y: Well, you see them around. And you text. Usually, this is where most sexting happens, because girls want to prove they are down with it and guys are testing the boundaries of what is sexually acceptable without doing it with a girl they like too much and are therefore fearful of upsetting.

Gen X: Let’s talk about the bad sex controversy. How bad is this bad sex? And is consensual sex ever really all that bad? Like, compared to no sex at all?

Gen Y: She likes it. What makes it bad? It’s awkward and it’s uncomfortable for us to watch but to jump to the “she’s having abusive sex because she has low self-esteem” is kind of…I don’t know, too pat? I feel like even if everything else in her life was going great, Hannah would still like Adam, and he does seem genuinely interested in her at moments, and far be it for us to judge other people’s fuck-buddies. He might also be the only person in her life calling her out on bullshit.

Gen X: I have to agree on this. I find Frank Bruni and Katie Roiphe, both of whom seem to be a little traumatized by these sex scenes, suspiciously over-eager to denounce this terrible sex. My theory is that this is generational. The problem is, we’re old. We’re not young and hot like you kids. So all we’ve got is, we basically have figured out how to do it. Saying the sex in Girls is horrible and dispiriting is a way of saying, “I have great sex all the time and I love it.” The more fumbling and awkward this Gen Y sex is, the less despondent middle-aged shlubs have to feel.

Gen Y: You figured out how to have sex that looks good on TV? I think you are in the wrong business, then.

Gen X: Well, it would look good in theory if we were somewhat more trim. Maybe? I mean, no. But I think the subtext in that criticism is, “We may be old but at least we know whether to move back and forth!”

Gen Y: Realistically, most people’s sex would look awkward and weird to anyone watching. She’s showing something different than normal TV sex, which is frightening to people, because it’s not sexy-sex. The thing is, people love to talk about Lena being so “brave” for always putting herself in awkward sex scenes in her own movies. The last time anyone was that “brave” was Jason Segel going full-frontal flaccid in Forgetting Sarah Marshall, and that was not in a sexual context.

Gen X: I’ve got to say, I graduated amid a terrible economy, too. I didn’t even know it. It wasn’t treated as a national emergency, and unlike now, the society as a whole made no expression of concern about what kids my age were going to do. They called us slackers. It was ugly for awhile, but we worked it out. The idea of taking money from our parents was unthinkable. This was the Die Yuppie Scum era. We’d sooner have found a squat. (Although my folks did pay for me to go to NYU, which was very generous of them.)

I wound up taking some pretty bad jobs, including a very brief stint at a “mens’ sophisticate” magazine. Totally bleak, but I learned Quark and how to write fake sex confessions on deadline. What I want to know is, is everyone your age really having your “groovy lifestyles” bankrolled by mom and dad? Have you kids no shame?

Gen Y: I feel a mix between Adam and Hannah’s character here. Like no, I don’t take my parents money! I mean, my dad’s checks helped SUBSIDIZE me when I was laid off from blogging at Jossip but I totally paid him back later, I think?

Gen X: You also hustled up some money working for this website ASSME.org that I used to run. You were a go-getter. And the link is now dead because basically I remain a slacker.

Gen Y: True! A friend is in a similar situation, having just graduated, and without her parents help she wouldn’t have landed a paying job after months of unpaid internships. So, in response: yes, we take your money after you just bankrolled our liberal arts education. But it will pay off dividends when we give you a shout-out in our memoir.

Gen X: If you treat us anything like Lena Dunham is treating Hannah’s parents, no thanks!

Gen Y: Wait, those parents were AWFUL. The mom from Freaks and Geeks has gotten so mean!

Gen X: What assholes. I don’t buy them for a second, do you?

Gen Y: Nobody’s parents are BOTH professors. And if they are, they aren’t getting a lakehouse. Also, professor parents wouldn’t just cut you off like that. You can tell the dad is wavering, as he should be.

Gen X: I think cutting someone off without any notice after two years of paying the full freight is a stretch.

Gen Y: Yeah, and it IS cheaper to be on a family cell phone plan!

Gen X: True, although not if she’s doing a lot of streaming…

Gen Y: Right: it’s like, what’s the mitgating circumstances? They came to town just to give her horrible news? Do they expect her to move back in with them, which would be the other option?

Gen X: I do think Lena Dunham is trying to have it both ways in this scene. Hannah is written as self-absorbed and spoiled, but she’s turned the parents into monsters as a way of rationalizing Hannah’s behavior.

Gen Y: Maybe it’s a scare tactic: sink or swim. Although we definitely see that push hurting Hannah in terms of her internship.

Gen Y: How believable was that? That an employer would fire you from an internship? (I already know the answer to that question, by the way, as I have been relieved of many internship duties.) It’s true about Photoshop though.

Gen X: Those Asians with their Photoshop!

Gen Y: Why doesn’t anyone tell you in college that Photoshop will be the ONE THING you need in the real world?

Gen X: I think Hannah’s employer is another example of a thinly drawn character whose only purpose is to make her seem more likeable, which to me shows a loss of nerve on Dunham’s part.

Gen Y: I mean, he’s played for humorous effect…I don’t think it’s a “loss of nerve,” because look, the show is a comedy and not a documentary or a Herzog film. And it’s true that if you hit up employers for jobs after interning, they’ll be like “Why buy the cow?”

Gen X: In terms of sex, it is practically a documentary or a Herzog film! That aspect is plenty nervy. But Dunham is more willing to show her character’s supposed physical flaws than her moral or emotional ones.

Gen Y: You sound like you should write her memoir, Aaron.

Gen X: I think she’s nailed the sense of entitlement, though. It’s pretty clear that in more than a year as an intern, she hasn’t done much to make herself necessary to the company. Still, she expects to be given a job just because she wants one. The guy is an asshole, but a year seems like plenty of time to figure out a way to become useful.

Gen Y: True. She hadn’t been doing their twitter feed? What WAS she doing? The entitlement is true to life. I’ve been in so many fights with roommates waiting for their parents’ checks to clear for their rent.

Gen X: We’ve had interns here at the Observer who were hired full time, and others who weren’t but really wanted to be. It’s hard to disappoint people, but even the Gen Y kids aren’t quite full enough of themselves to believe, like Hannah does, that just asking is enough.

Gen Y: Sure she could have started that Twitter feed on her own. That would have shown motivation.

Gen X: I do think the internship scene tells us something about Hannah that will hopefully be explored a bit more, which is that despite being the smartest person in the series, she’s got some tremendous blind spots and has not quite earned that beleaguered attitude of hers.

Gen Y: But moving on: what’s really unbelievable is that she’s been living with her best friend for two years and they don’t hate each other. I lived with my only two female friends in one apartment after college. Guess how many of them I still talk to? And/or haven’t blocked on Facebook?

Gen X: I love it how you girls all wake up spooning each other. I think I saw a post on your Tumblr where you and your sister were doing that.

Gen X: How about shaving your legs?

Gen Y: Nope. But we had a small tub. Also, even though we lived together, my sister never plodded around the house in her underwear when my boyfriend was over.

Gen X: And did your boyfriend walk into the bathroom all the time, then stand there awkwardly watching the girls take pregnancy tests or whatever? Is that a thing nowadays?

Gen Y: To be fair, he was high. On that stuff I’ve never even heard of! Opium twigs?

Gen Y: Is that really legal?

Gen X: We should see if you can actually buy that in the flower district.

Gen Y: Shit, I’ll be down in Chinatown, catch you tomorrow.

Gen X: Send an intern. Maybe they can figure out how to make a living! 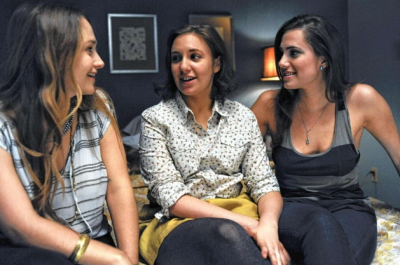