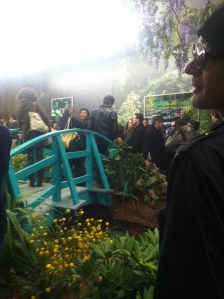 Friday night, true to the words of gallerist Kathy Grayson, her gallery, the Hole, had been transformed into Monet’s gardens at Giverny, or as close an approximation as can be had on the Bowery. The installation was created to house the photographs taken by E.V. Day of Kembra Pfahler at Giverny in Ms. Day’s signature futuristic style, which feature a campy twist: Ms. Pfahler, nude, covered in brightly colored paint.

As soon as we passed through the doorway, we stepped onto grass–fake grass–which stretched from wall to wall cut through with a gradually winding gravel path. Moving onto the gravel, dodging the occasional child rooting around, revelers were lead along, yellow-brick-road-style, to the gallery’s Emerald City, where prickly groves of bamboo, bright tulips and overhanging vines surrounded a gently tinkling pond across which sailed brightly colored water lilies. Some lilies were real, while some were fake. The walls, covered with a photo-banner of willows, confused further the boundary between the fake and real as guests fingered rhododendron leaves and bamboo stalks and looked around in wonder.

Two friends stopped on the bright teal bridge arched over the pond and smiled for a photo op. Further along down the path one young man crouched down within the tall pond reeds and smiled cheekily as his friend snapped a picture. Ms. Pfahler, who could be seen in full red and blue body paint in the large photographs that adorned the walls, was dressed in plainclothes and funky white framed glasses touching up a young woman who was painted red, like her character Voluptuous Horror of Karen Black playing the part of wood sprite.

And then, appearing from behind a thicket of bamboo was Jeffrey Deitch, for whom Ms. Grayson had worked for eight years before starting her own gallery. “What do you think?” Someone asked him.

Mr. Deitch looked around and said, “It brings together all these people who normally wouldn’t come together.” Then a man approached Mr. Deitch.

“Hey Jeffrey,” he said shaking Mr. Deitch’s hand. “Kathy learned well from you. This is over the top.”

Ms. Grayson’s colorful friends were seen peppered throughout the gravel path in the gallery like surreal encounters in the board game Candyland. Artist Terence Koh, in his signature puffy white coat, made a circle around the pond with the Hole’s assistant director May Anderson. Artforum‘s Knight Landesman showed up in a bright red suit. Artist Aurel Schmidt with her dark-framed glasses stood talking to Mr. Deitch. On our way out, a film crew had arrived and Ms. Grayson and Mr. Deitch were speaking to the camera. Outside, visitors lingered smoking and chatting as if keeping the dream alive for a little bit longer.