Last night, the Westchester, Putnam and Dutchess Republican County Committees held a joint convention at the Crowne Plaza in White Plains and voted to back State Senator Greg Ball in his re-election fight against Assemblyman Steve Katz. Mr. Ball issued a statement following the results expressing his hope Mr. Katz will drop his challenge for the State Senate seat and focus on being re-elected to the Assembly.

“We have always enjoyed strong grassroots support and I am now proud to merge that grassroots machine with institutional support. It’s now time for the party to come together, for the Assemblyman to focus on maintaining his solid Republican seat, and for all of us, as elected officials to come together to continue to work for, and deliver for the taxpayers,” Mr. Ball said.” “My sole focus now, as always, is on job creation, lowering taxes and working with our critical Senate Majority and with Governor Cuomo to get New York State back on track,” said Senator Greg Ball.”

Mr. Ball began serving in the State Senate last year after spending three years in the Assembly. He won the backing of the three local party committees by a margin of 15,233 votes to 6,260.

Mr. Katz and Mr. Ball are former allies who have fought a heated campaign that has included chicken costumes, nasty anonymous websites, a Facebook flap involving the assemblyman’s wife and, most recently, a pants-less photo hoax. The contentious nature of the campaign has led many observers to speculate Mr. Katz might continue to mount a primary challenge against Mr. Ball though he doesn’t have local party support. As of this writing, Mr. Katz has not responded to request for comment from The Politicker. 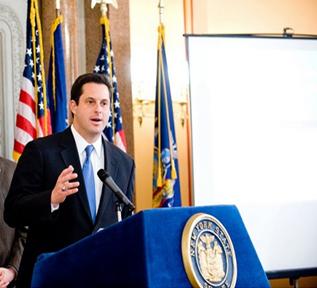