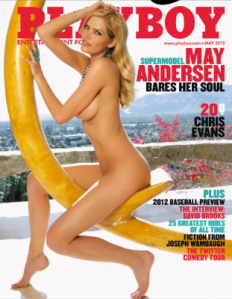 It’s not often that we hear of galleries with supermodels for assistant directors. But then again, the Hole isn’t an ordinary gallery. So when it was announced that May Andersen, the Hole’s assistant director, would appear on the cover of the May 2012 Playboy, and that the gallery would be hosting a signing tomorrow evening at the bookstore adjacent to the gallery, the news struck us as both odd and alluring.

The writer, Chris Tennant, visited Ms. Andersen at the gallery. “As she guides us through the space,” Mr. Tennant says, “identifying and describing in detail each piece we pass, it’s clear she knows what she’s talking about. In fact, it turns out she works at the gallery full time. As in ‘May Andersen is an assistant director at one of New York’s most respected avant-garde galleries.'” But even Playboy questions it. “We have to ask, What the hell is she doing here?” The article explains:

By now May has arranged herself on a bench in front of a life-size Barry McGee sculpture of a graffiti artist perched precariously atop a trash can, mid-tag. Her black micro-miniskirt, snug angora sweater and vertically striped garter-belted stockings make it hard to maintain eye contact.

‘Basically, I’m 29 now, which is old in model years, and around the time I started thinking about what I wanted to do next, this opportunity came up,’ she says softly.

The rest of the spread is Ms. Andersen posed coyly around a pool of a home atop a hill in Palm Springs with a great view, interspersed with some snapshots from her modeling days. We have to ask, What is she doing as the subject of a gallery magazine-signing?

“I think this is the only time that any member of the art world has ever been on the cover of Playboy,” Ms. Andersen told The Observer. “I wanted people to know the gallery is behind me. Also, we have a fantastic show up, ‘Giverny,’ and this is a way to reach a broader audience. We feel that everyone should know about art. This way we’ll get some people into the gallery who like Playboy.”

This event isn’t really that out of bounds for the anything-goes vibe at the Hole, which regularly hosts fashion shows, music concerts and one-off creative events like a summer party with an artist-designed bounce-house in the Hamptons. And it’s not the first time we’ve had nudity at book signings in galleries. Just last month, artist Rob Pruitt got naked and signed some of his books at Karma.

Mr. Pruitt’s stunt, while done to gain attention, seemed in line with the artist’s tongue-in-cheek aesthetic—you can see Mr. Pruitt’s chrome sculpture of Andy Warhol, The Andy Monument, in Union Square right now. And after Warhol, we are now accustomed to viewing artists as celebrities.

In the case of Ms. Andersen’s Playboy signing, the stunt seems to be seeking to do the opposite. The magazine signing in the gallery store seems aimed to legitimize as art the act of posing nude. And though this is in line with Playboy‘s long-held mission of raising the nude body to the level of a work of art, we’re not sure how this event furthers the purposes of the gallery or honors Ms. Andersen’s virtues as a gallerist—it may even erode that slightly. But maybe not.

As a bystander it feels outré to say that this is anything but a brilliant marketing move in which each party is capitalizing on a little borrowed currency, especially with Playboy.com being the chief sponsor of the current show at the Hole, the aforementioned “Giverny,” by E.V. Day and Kembra Pfahler. And if the goal is to sell more magazines and sell more art, they’ll probably be doing a little of both.

While we enjoyed having a reason to pick up a copy of Playboy off the stand and write it off as research, we think the closing words of the Playboy article say it all: “Remember, gents: It’s never too late to start collecting.”

Filed Under: a-block, Playboy, The Hole, May Anderson