Last night, we broke the story that British writer Laurie Penny was saved from being hit by a taxi by Ryan Gosling. It was good feelings all around, especially after Ms. Penny took up the pen and wrote a piece for Gawker today about how, even though she was saved by Mr. Gosling–who was very kind for making sure she didn’t die–she doesn’t consider him a real hero. In fact, Ms. Penny would only consider her story newsworthy had Mr. Gosling not saved her.

As she wrote in Gawker:

People do lovely, considerate things for other people all the time. I don’t believe that the fact that A-list celebrities occasionally act like human beings is in itself news — it might have been slightly newsworthy had Mr. Gosling simply floated by on a cloud of his own cultural significance whilst a young woman got smeared into the tarmac, but lucky for me, even the most chiseled-jawed of us are usually boringly dependable in times of minor peril.

The real heroes I’ve met in America are risking everything to make sure that the United States doesn’t slide further into bigotry, inequality and violence whilst everyone is distracted by the everyday doings of celebrities.

I thought he was marvelous in The Ides of March, and will feel weird about objectifying him in future now that I have encountered him briefly as an actual human.

Actually, what we find weird is that someone who claims to be a “feminist, a writer, and a gentlewoman of fortune” who refuses to be labeled as some sort of damsel in distress has absolutely no problem making up stereotypes for Mr. Gosling before having met him.

In an email to The New York Observer (sent before the  Gawker piece), Ms. Penny wrote about that fateful meeting:

Lucky or not, I feel it’s some sort of karmic retribution for my having spent so much time cackling at the ‘manarchist Ryan Gosling’ meme. I have no idea if Mr Gosling is actually a manarchist, but he’s clearly a decent sort of person, and looks rather dashing in double denim.

A manarchist, by the way, is “an angry young “anarchist” male that has issues relating to women” (according to UrbanDictionary, at least.) This is the Tumblr of Manarchist Ryan Gosling. You’d think Ms. Penny would try to underplay the hypocrisy of judging celebrities for their looks while she herself “refuse(s) to be cast in any sort of boring supporting female role” in the story of how she almost didn’t survive crossing the street.

But no, don’t thank Ryan Gosling. He was just doing what any normal person would do. The fact that another person didn’t actually save your life is totally irrelevant. Right? 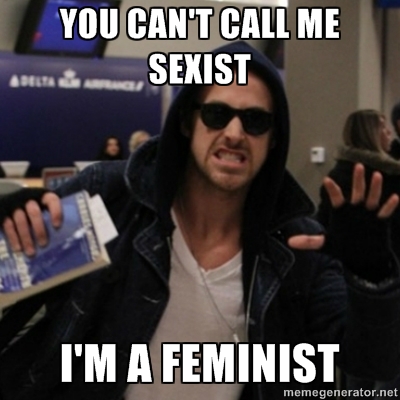