It would be easy to compare Whit Stillman’s latest feature, Damsels in Distress, to other flicks about the dangers of female friendship: It’s Heathers without high school, or Mean Girls at college. After all, the movie begins with young, brunette ingénue Lily (Analeigh Tipton) during her first day at Seven Oaks College, being swooped in on by a pack of three severely affected juniors who immediately offer her friendship. Greta Gerwig is the blonde queen bee, Violet, and her two cohorts include the British Rose (Megalyn Echikunwoke) and the ditzy Heather (Carrie MacLemore). These three are seemingly on a mission of good: they run the school’s suicide-prevention center and spend most of their time “helping” the brothers of D.U., one of the school’s Roman (not Greek) fraternity houses.

But, much in the style of Mr. Stillman’s other films (this most recent endeavor bearing the strongest resemblance to his maiden motion picture, Metropolitan), the magniloquent style of these young women is more sound and fury than actual substance. Violet, in particular, seems to be the worst of the bunch: her interest in the D.U. boys, particularly an oaf named Frank (Ryan Metcalf), seems to serve only her selfish purpose of proving that she is indeed smarter and more cultured than those she’s ostensibly trying to help. As she tells Lily, “The tendency, very widespread, to always seek someone ‘cooler’ than yourself is always a stretch … often a big stretch. Why not instead find someone who’s frankly inferior?”

This would make for an interesting film all by itself, with Violet as a villain of pedigree who needs to be brought down a peg or two. But Mr. Stillman doesn’t paint his characters in such broad caricatures: early on, we see that Violet is open to critiques from the new girl, actually thanking her for providing her with insight that her motives might not be altogether altruistic. And no, she’s not being facetious.
The movie transcends a run-of-the-mill chick flick—above even a Whit Stillman film. After a series of unfortunate incidents involving Frank and two new love interests for Lily—the French Cathar Xaviar (Hugo Becker) and “strategic operator” Charlie Walker (Adam Brody)—Violet’s pretentious posturing is revealed not as a sham persona, but part of a larger quirk in her own personality: a strange, obsessive-compulsive weirdo who doesn’t seek out the company of “doofi” (the correct plural of doofus, we learn) because she needs someone to feel superior to, but because those are the people with whom she feels the most kinship with.

Damsels in Distress is a sweet film putting on airs. It offers up an original view of all those “cool girls” in college with their great vocabularies and noses turned up, as well as the frat jocks who so often play the cruel foils to their more bookish counterparts. In Damsels, it is the nerds­—like the head of the student paper Rick DeWolfe (Zach Woods in a character turn from the whipping boy, Gabe, on The Office)—who are presented as the true cynics, while Violet, Frank and Charlie are the actual weirdos. A great role is made of D.U.’s bartender and frat brother Thor, whose goal in life is to be able to identify colors. It’s a throwaway gag that, in a lesser writer’s hands, might be played only for laughs, but Mr. Stillman uses it to underscore some of the more poignant moments about the dangers of precociousness.
“I thought you were the cool girls,” Lily says sadly as she ditches Violet and her posse near the end of the film. Lucky for Violet (and for the audience), that’s so far from the point of college—and life—that the new girl’s desire for normalcy actually makes her the meanest girl of them all. 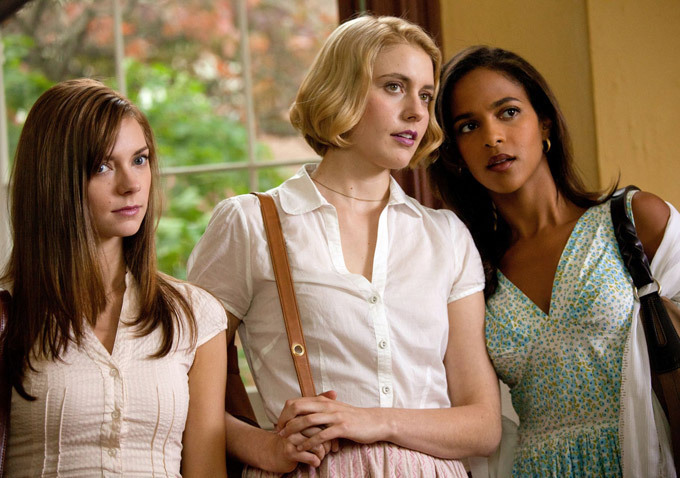