You can still see traces of the Occupy Wall Street encampment that once stood in Zuccotti Park—a contingent of police officers by the plaza’s entrance and an NYPD watchtower standing guard on Zuccotti’s
northern edge. However, the protesters who made this park their home before being evicted by the police last November are largely gone and the news trucks that formerly stationed themselves outside have departed in favor of a Chabad Mitzvah Tank.

On a recent afternoon at Zuccotti, The Observer encountered handful of tourists and businessmen on lunch breaks but there was nary a demonstrator in sight. At nearby Federal Hall, there were about 11 Occupiers holding signs and sitting on the steps. On the street below, workers were seemingly oblivious to the Occupiers in their midst.

“You’re a Republican?” a suited man asked his friend as they briskly passed by. “Good man!”

Seven months into the movement, the Wall Street that protesters are ostensibly trying to occupy has become inured to the spectacle of carnivalesque protests, demonstrators sleeping on sidewalks and mass arrests. And it seems the rest of the city has too. The protesters are in danger of becoming just another discordant note in the daily din that New Yorkers are so adept at tuning out, like panhandlers, street performers, sidewalk preachers and the other distractions of urban life.

“Their entire message, it’s so fragmented that no one hears it,” said Sam Padilla, the owner of a construction firm behind several developments in the financial district. “It becomes a nuisance, it’s like a gnat that you’re just trying to swat away. It’s just another element of the background noise. They want to be heard, but their message is too confusing.”

Daby Carreras, a broker with Spartan Capital, smoked a cigar a half block away from the Federal Hall Occupiers. With their many messages, Mr. Carreras said the protesters concerns just get “mixed up” and don’t grab the attention of Wall Street workers.

“The brokers are thinking about how to make more money than they did last year,” he said.

Wider public interest in the Occupy protest has also waned. Mentions of “Occupy Wall Street” in the news media are down this month by nearly 75 percent from peak in October, according to Google News. During that same period, Google searches for “Occupy Wall Street” dropped by over 80 percent nationally. The decline was even steeper in New York.

On May 1, however, Occupiers hope to jump back to the forefront of the city’s collective consciousness with a massive day of demonstrations that has been termed a “general strike.” The forecast for the day includes civil disobedience, political performance art, flash mobs and a push into Midtown.

As they move toward May Day, the protesters promise the debut of a new, decentralized model for the movement that will fuel a comeback following their eviction from the park. However, their adversaries on Wall Street aren’t the only ones who don’t seem to speak the protesters’ language. 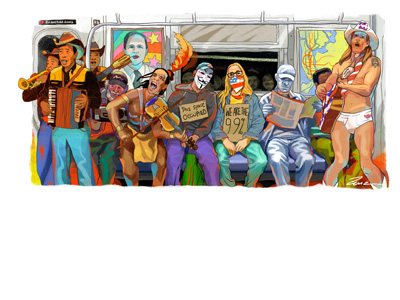