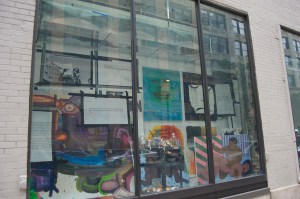 The windows of Maccarone during the 2011 exhibition "After Shelley Duvall '72," curated by Bjarne Melgaard. (Courtesy The Observer)

Come September, the West Village’s Maccarone gallery, located at 630 Greenwich, will become a bit larger. Carol Vogel reports in The New York Times that proprietress Michele Maccarone has acquired the lease for the dry cleaner next door, Slate NYC (its slogan is “permission to get dirty,” which could apply to not a few of the gallery’s artists). The gallery will unveil the new space in September with a show by artist Rodney McMillian.

Ms. Maccarone, a former director at Luhring Augustine, got her solo start down on Canal Street in 2001. Her roster includes Alex Hubbard, Ryan Sullivan, Hanna Liden and Edgar Arceneaux.

Thanks also to Gavin Brown’s expansion on the block back in 2010, almost the entire area bounded by Morton, Greenwich, Leroy and Washington Streets will soon be devoted to contemporary art galleries.