This afternoon, Mayor Michael Bloomberg tapped Wendy E. Saunders to be Acting Director of the Mayor’s Office of State Legislative Affairs. Ms. Saunders will replace Micah Lasher, who spent a little over two years in the position and became known as Ms. Bloomberg’s “Man In Albany.” Mr. Lasher left the Bloomberg administration this week to join the education reform advocacy group Students FirstNY.

“Wendy brings valuable legislative experience to the office and has proven herself to be an invaluable asset to our legislative team,” Mr. Bloomberg said in a statement announcing Ms. Saunders’ appointment. “New Yorkers will be well served by having an advocate with her skill and dedication working for our City in Albany. We have had an overwhelmingly successful year in Albany, and I am confident that Wendy is the right person to continue to build on those successes.”

Ms. Saunders already has experience in Albany. She was previously Assistant Vice President of Intergovernmental Affairs for the New York City Health and Hospitals Corporation, in which capacity she oversaw the agency’s activities in the State Capitol. Saunders has years of experience working with State government, and has served in the executive and legislative branches. Prior to joining the Health and Hospitals Corporation, Ms. Saunders served as the Deputy Secretary for Health, Medicaid and Oversight under Governor David Paterson and as the Executive Deputy Commissioner of the New York State Department of Health.

“Working with the Mayor’s team in Albany and representing the Health and Hospitals Corporation has been a great privilege and I’m humbled that the Mayor is giving me responsibility for the City’s full state legislative agenda” Ms. Saunders said of her new role. “I assume this position with great deal of respect for all of our partners in government, and will work day and night to assure the best possible results for New York City.”

During the first year of the Cuomo administration, Mr. Bloomberg was dogged by the impression he had a frosty relationship with the governor. Mr. Bloomberg has described those reports as “grossly overblown.” In recent months, the relationship between City Hall and Albany has shown signs of improvement with Mr. Bloomberg getting behind Mr. Cuomo’s push for pension reform and the governor including one of the mayor’s priorities, juvenile justice reform, in his budget. 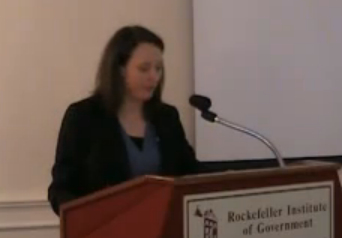