Imagine, if you will, the landscape of New York City 15 years hence. A drive to Citi Field in Willets Point takes you past a pleasant if overpriced cluster of residential buildings, rather than seedy chop-shops. Roosevelt Island is home to a sprawling $2 billion applied-sciences campus spinning out an army of developers to populate ping-pong-table-clad start-up clusters from Dumbo to Union Square. On Manhattan’s far West Side, the rezoned stretch of Hudson Yards offers millions of square feet for office space, housing and retail and 14 acres of open public space. You can already see traces of a more built-up, scrubbed-down New York in Luna Park’s freshly-painted Scream Zone, the first new roller-coasters Coney Island has seen in 80 years, and the rapidly-metastasizing arena at Atlantic Yards, which will soon play home court to the rebranded Brooklyn Nets.

It’s hardly a scenario Seth Pinsky could have imagined in September 2008, when Lehman Brothers collapsed just seven months into his tenure as president of the New York City Economic Development Corporation (EDC), a not-for-profit arm of the Mayor’s office charged with fostering economic growth across the five boroughs.

At the time, Mr. Pinsky was a 36-year-old former lawyer and investment analyst, only a few years removed from a private sector gig refinancing real estate deals for the big banks as an associate at Cleary Gottlieb. He had one big win under his belt—jump-starting the World Trade Center redevelopment project—but he didn’t have “a political bone in his body,” as one insider put it. “People kept saying to me, ‘Wow, you’re the head of the Economic Development Corporation? We’re in an economic meltdown!’’ Mr. Pinsky told The Observer.

“At the time it meant, ‘You must be really crazy.’”

Under Mr. Pinsky’s leadership, however, observers say the EDC has transformed itself from a real estate matchmaker for companies seeking office space into a policy-setting organization, spearheading diversification away from the finance, insurance, real estate economy (also known by the unofficial acronym, FIRE, which had rarely seemed more apt). Thanks to what one former employee called Mr. Pinsky’s “savant”-like facility with financing and structuring deals, a number of projects first proposed in the ambitious early years of the Bloomberg administration have begun making real progress. Some of the projects, like Willets Point, have “bedeviled administrations for decades,” noted Mr. Pinsky. And then there’s the EDC’s ultimate sleight of hand: convincing Cornell and Stanford to engage in a bitter rivalry to build a $2 billion tech campus, all by waving a $100 million grant and a swath of land on a sleepy East River isle.

All told, these projects will be the tent poles on which Mayor Bloomberg hangs the legacy of his 12 years in office. As careful chroniclers of the Bloomberg administration note, many of these large-scale development projects were first pitched by former deputy mayor for economic development Daniel Doctoroff as part of his grandiose PlaNYC bid for the 2012 Olympics, which drew comparisons to Robert Moses at the time, but didn’t come to fruition in the six years before he was tapped to lead Bloomberg LP.

“Dan in many ways set the agenda, set the vision,” said Robert Lieber, Mr. Doctoroff’s successor as deputy mayor. “And then Seth has been, in no small part, responsible for the execution and getting stuff done.”

Mr. Pinsky’s successes have not come easily. Over the years, he has acquired a reputation in the city’s development community as a fearsome negotiator. Detractors complain about overzealous demands. “There’s a widespread belief that Seth tries to get every friggin’ nickel off ya,” said one source. You wouldn’t know it by looking at him. Narrowly built with a long face, Mr. Pinsky gives off something like a young Woody Allen vibe.

“When one says ‘tough guy,’ it’s not like he’s threatening or anything,” said James Whelan, senior vice president of public affairs for the Real Estate Board of New York, who worked under Mr. Doctoroff at the time. “He’s quite affable, nice guy and everything. Analytically, he’s brilliant.”

“His personality can be a little grating on people sometimes,” noted Mr. Lieber. “He’s very picky and argumentative, but I think that has evolved as he’s been there.”

“There are no permanent obstacles with Seth,” said Mr. Doctoroff. Mr. Lieber put it more bluntly: “He wears the other guy out.”

Some blame that stance for the chaotic denouement of the tech campus competition. “There’s a line that Stanford left because Seth was too difficult to deal with,” the source said. Those privy to negotiations say Stanford was taken aback by the binding legal penalties involving factors outside of their control.

“I’m not sure anyone really knows what happened there,” Mr. Pinsky said. “I think developers are used to dealing with cities that just write a check and say, ‘Will you just swear on a Bible that you’ll do this?’”

Meanwhile, community advocates and urban planners decry the EDC’s corporate structure and lack of transparency. “They pass for being a government agency, and in fact they have more power than many of the line agencies under the mayor,” said Tom Angotti, director of the Center for Community Planning and Development at Hunter College and the author of New York for Sale, who noted that by the time neighborhoods are consulted, the EDC has typically already made up its mind.

“If [closing deals] is the only criterion, he’s been a success. But for me that’s not the only criteria, nor should it be for the public. The question is what’s the quality of the deals,” added Mr. Angotti, a technical advisor to the alternative plans for the arena at Atlantic Yards. He cited the Brooklyn stadium as an example of selecting a more suburbanized approach over a plan that would benefit locals. “It divides three neighborhoods instead of uniting them and it just creates another giant super block in the middle of Brooklyn.”

“When I was in middle school I used to design cities,” Mr. Pinsky told The Observer. We were sitting down for lunch at the Stone Street Tavern, an old-school City Hall favorite, with shamrocks on the menu and Louie Prima in high rotation.

“I had a city that I designed on four big pieces of tag board, where I kind of mapped everything out,” he explained, removing his ’50s-style Browline glasses. The elaborate maps used color coding to show the business district, the residential districts, subway lines. “I made up the companies that were based there,” Mr. Pinsky added of his pre-SimCity urban dreamscapes.

Zoning fantasies don’t often rank among a 13-year-old boy’s after-school activities, but Mr. Pinsky, who tucked his diamond-patterned purple tie into his dress shirt once the food arrived, comes across as a guy who, even as a kid, was more comfortable around adults.

Which isn’t to say he’s without his youthful indulgences. “I have—this is an embarrassing admission—I eat American cheese almost every day,” he said admiringly of The Observer’s grilled cheese. “I actually think I’ve had American cheese for one meal almost every day since I was about six-years-old.” The routine involves some bread and often a condiment. “Not mayo, Miracle Whip. Big difference,” he elaborated.

Mr. Pinsky grew up in the suburbs of New York until he was 10, when his father, a Reform rabbi, moved the family to Minnesota. “I like to tell people I grew up in the New York area and I just lived in Minnesota,” he said. “I was fully formed by the time I moved there.”

After earning a history degree from Columbia, Mr. Pinsky took a job as a financial analyst in M&A at Wolfensohn Inc., the investment firm launched by former World Bank president James Wolfensohn, albeit with some reservations. He made a bargain with himself to take the LSATs to decrease the likelihood of “going into finance for the rest of my life.”

From there he went on to Harvard Law, eventually working as an associate at Cleary Gottlieb, where partners, aware of interest in New York, would try to steer local cases his way. The company’s office was at 1 Liberty Plaza, but the day the towers fell, Mr. Pinsky happened to be on a business trip in Washington, D.C. Months later, when employees were allowed back in the building, he would monitor the recovery and cleanup efforts, watching as workers searched for remains and stopped to salute as bodies were driven out of the site covered in an American flag.

As he gazed out from his office window, Mr. Pinsky thought, “If I’m ever going to do it, now is the time.”

On paper, Mr. Pinsky’s résumé doesn’t necessarily read like that of a closer. Indeed, his ascent still mystifies some City Hall insiders. One former official sent us snippets of Mr. Pinsky’s bio via instant message. “Like WTF,” the source commented, still baffled by Mr. Pinsky’s appointment. “There are 500 people in the NYC McKinsey office with more experience than that.”

After he was hired “sort of into the bowels of EDC,” as Mr. Doctoroff put it, Mr. Pinsky distinguished himself with uncommon financial prowess. “You know, in city government there is not a wide range of those sort of skills that are available, particularly when you’re dealing with commercial parties on the other side,” he said. In other words, you can’t go up against Larry Silverstein with a bleeding-heart nonprofit type. Thus, Mr. Doctoroff decided to appoint Mr. Pinsky the “quarterback” of WTC negotiations launched in 2005. 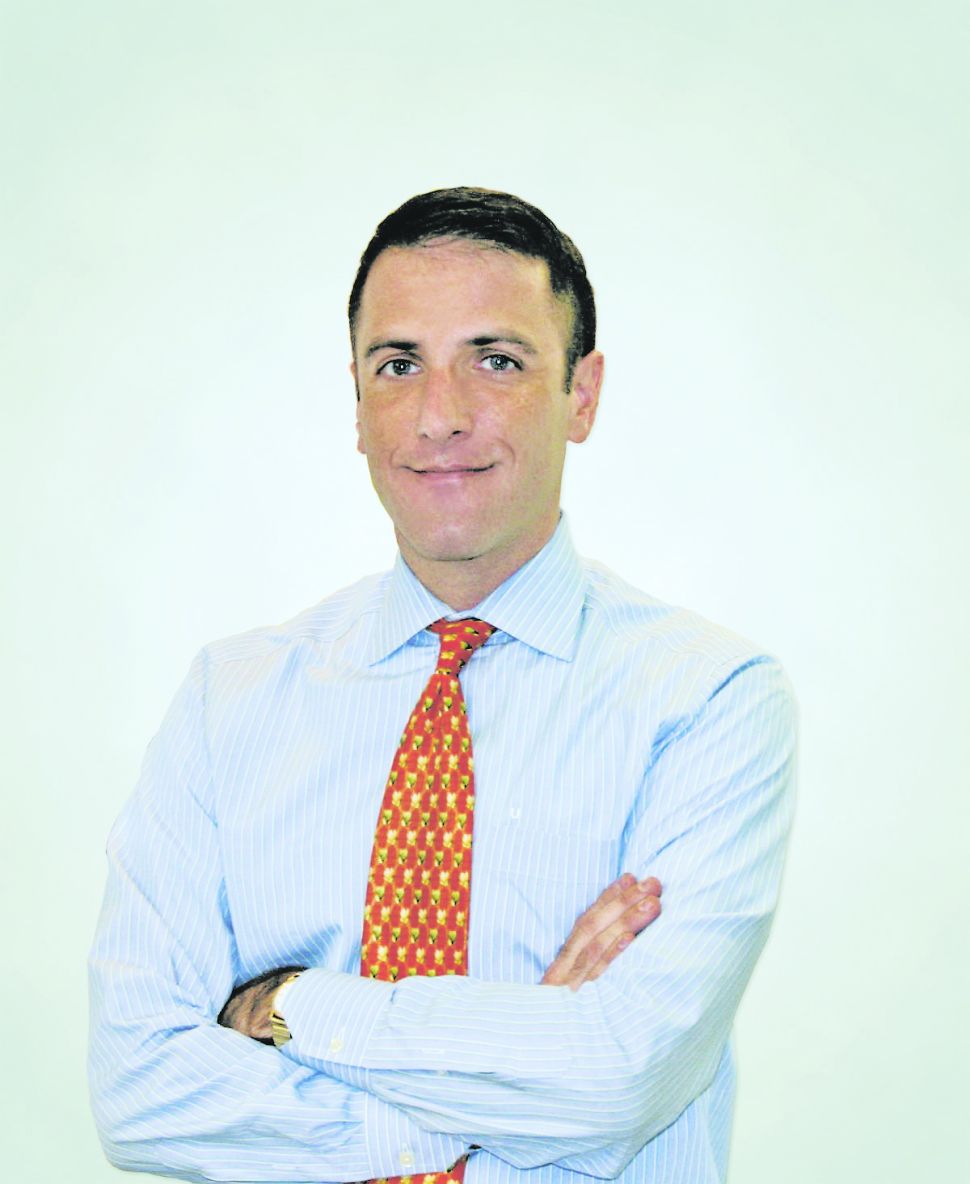