Does President Barack Obama chow down on family pets in the Oval Office? That would be the implication in a new cartoon in the New York Post today, part of the paper’s claim that the POTUS’ stance against Republican candidate Mitt Romney leaving his dog tied to the roof of his car was hypocritical.

You see, President Barack Hussein Obama himself once ate dog 17 years ago, and then had the gall to gloat about it in his memoir, Dreams from My Father.

Since he once sampled the native cuisine provided by his Indonesian step-father as a boy, it’s now fair game to assume that the savage President would go so far as to eat the family’s dog, Bo.

Sure, it’s meant to be satirical to show the leader of the free world–who, despite his birth certificate, can never really scrub ‘Otherness’ from his record–but even the Governor Romney was smart enough to stay away from the touchy subject.

“I think the campaign is ultimately going to become about jobs, not dogs,” Mr. Romney was quoted in the Post piece. He’ll leave that smear tactic to his campaign advisor Eric Fehrnstrom‘s tweets and the New York Post, and let the American people be the judge. 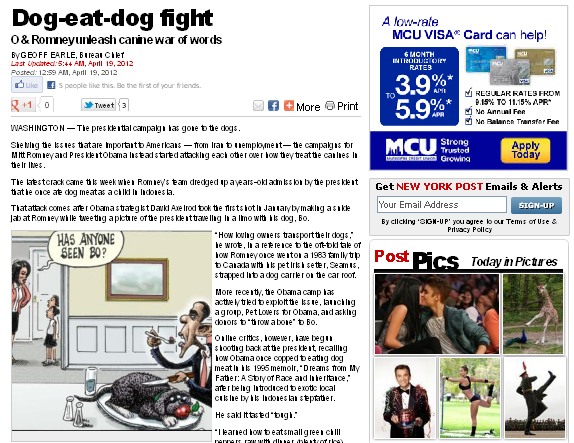