“I’m going to say, in closing, that I don’t want any of you to be confused about this and I dont want the media to be confused, I’ve stayed in the race to articulate big themes and big issues,” Mr. Gingrich said.

Mr. Gingrich is keeping his “big themes” in this race, because he believes this election is the most crucial for the country in more than a century.

“We have a moral obligation to defeat Barack Obama. I believe this is the most important election for the future of our country since the election of 1860 I believe that, if we elect Obama, we’ll have a nightmare of radicalism, and economic destruction and foreign policy,” Mr. Gingrich said.

Mr. Gingrich ended his speech by acknowledging his underdog status and vowing that he would be willing to work with Mr. Romney if he loses and vice versa.

“I want you to know–and Romney and I have discussed this, I’m clearly theunderdog by a huge margin, but if I were to become the nominee, he would work all out because it’s our grandchildren’s future at stake,” Mr. Gingrich said. “If he becomes the nominee, Callista and I will work out, because it’s our granchildren at stake. The fact is, we are dedicated to a unified Republican Party winning the presidency.” 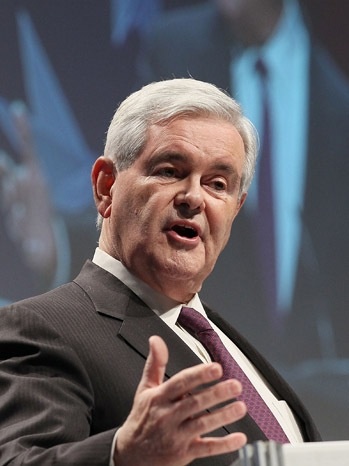