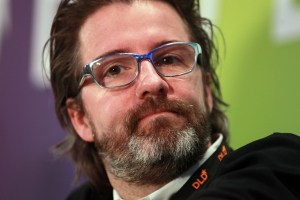 Organizers of the 2012 London Olympics have rejected a proposal from Olafur Eliasson, the Scandanavian artist best known to New Yorkers for installing waterfalls along the East River in 2008, that was to have been the major cultural attraction at this year’s games.

Mr. Eliasson’s project, Take A Deep Breath, would have invited participants to inhale and exhale on behalf of a cause, then captured that cause in a “breath bubble” on a website. The project would have cost some $1.5 million, out of an overall budget of $26.2 million for what organizers call the Cultural Olympiad.

The BBC has minutes from a board meeting regarding the rejection, which said the project went through many forms and that those responsible for the choice didn’t find “the revised proposals particularly attractive – and were aware of the possibility that the commission would be contentious.”

It might have also had something to do with a video about the project in which Mr. Eliasson said, according to the Daily Mail, “There’s not a lot to celebrate in the Olympics and I thought I would make a work of art that exposes some of the weaknesses of the Olympics.”

Earlier in the week, we learned that London has lined up a number of impressive cultural events to coincide with the games, among them a piece in which Martin Creed will have every bell in the U.K. ring at 8 a.m.