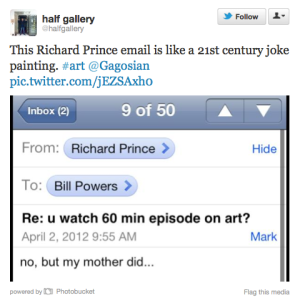 The email in question. (Courtesy @HalfGallery)

Earlier today, man-about-town Bill Powers of Half Gallery tweeted an email he received from artist Richard Prince with the subject header, “U watch 60 min episode on art?” In the body of the email, Mr. Prince wrote, “no, but my mother did…” Though we’re sure Mr. Prince loves his mother, his email seems like a dig at Mr. Safer for being out of touch.

While Mr. Powers tweeted that it seemed like a “21st century joke painting,” Mr. Prince wrote further on his blog that his mother really had watched the show.

4/4/2012
My mother called me this past Sunday and told me she had just watched a segment on the art world on Sixty Minutes, (she’s 94)…and wanted to know if I’d seen it. I told her “no.” She said they talked about Cindy Sherman and Barbara Gladstone. (My mother has trouble seeing but no problems hearing.)

Mr. Prince asked his mother who did the reporting for 60 Minutes. “She said, ‘Morley Safer,'” writes Mr. Prince. “I said, ‘oh… isn’t he the guy who paints watercolors of the hotel rooms where he stays when he’s out on the road?'”

Whether or not he paints hotel rooms when he’s on the road, he has at least exhibited his watercolor paintings of hotel lobbies in the ’80s. Mr. Safer, who told New York Magazine in 2006 that he has been painting since he was six years old (“It’s a lifelong hobby”), had a gallery show in 1980, his only show of record. At this two-person show at Central Falls Gallery in SoHo, Mr. Safer presented “Paintings of Hotel Lobbies” alongside the “Sketches from the Courtroom” by courtroom artist Marilyn Church. His paintings reportedly sold for $200 to $500 and Walter Cronkite even bought one. Mr. Safer did mention on his 60 Minutes segment that Cindy Sherman’s work was also being sold for $250 in the early ’80s. Maybe his digs at the contemporary art world are sour grapes? We may never know. But we would like to see some of those paintings of hotel lobbies.