Some anonymous internet artisan wants to make a meme out of Mitt Romney’s testicles. A political operative forwarded us a page on the blog platform Tumblr entitled “Romney’s Balls” based on a quote in a profile of Mr. Romney’s “most trusted advisor”, Eric Fehrnstrom written by Jason Zengerle in this month’s GQ.

“The best political operatives are the ones who provide their clients with a tangible quality the candidate himself lacks. If Karl Rove was Bush’s brain, then Fehrnstrom is Romney’s balls,” Mr. Zengerle wrote.

Inspired by that quote, the creator of “Romney’s Balls” has posted several pictures of Mr. Romney with photos of Mr. Fehrnstrom’s head standing in for his family jewels.

Mr. Fehrnstrom, a native of Boston, got his start with Team Romney by working on Mr. Romney’s successful 2002 gubernatorial campaign. He went on to serve as communications director for Mr. Romney during his four years in the Massachusetts State House and as Mr. Romney’s “senior traveling aide” during the 2008 presidential campaign. After working with Mr. Romney, Mr. Fehrnstrom started a political consulting firm, the Shawmut Group, that was instrumental in Republican Senator Scott Brown’s surprising 2010 victory in the special election to replace the late Democratic legend Ted Kennedy. 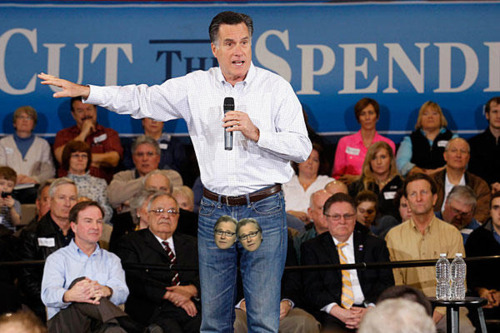