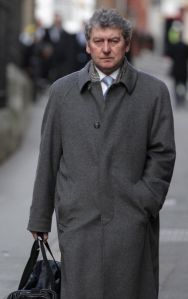 LONDON, ENGLAND – DECEMBER 15: Colin Myler, a former editor of the News of the World newspaper, leaves the Royal Courts of Justice after giving evidence to the Leveson Inquiry on December 15, 2011 in London, England. Mr Myler, who edited the News of the World from 2007 until its closure earlier this year, told the Inquiry that he likened the possibility of prior widespread wrongdoing to having “bombs under the newsroom floor”. (Photo by Oli Scarff/Getty Images)