Last night, actress Scarlett Johansson hosted a packed fundraiser at the Maritime Hotel for Manhattan Borough President and likely mayoral candidate Scott Stringer. Ms. Johansson introduced Mr. Stringer as the “future mayor of New York City” and the candidate said his campaign was going to “take back City Hall.” Despite the obvious signs he has his sights set on the mayor’s office, Mr. Stringer told The Politicker he’s still not officially throwing his hat in the ring.

“I’m terrible at public speaking, so I wont be running for office any time soon, although Scott and I joked how funny it would be if I decided to run for mayor for 2013 and I just utilized all of this,” Ms. Johansson said gesturing toward her famous curves. “It’s not a bad idea, it’s a good idea for a movie actually.”

Ms. Johansson, who’s brother once worked on Mr. Stringer’s staff, continued by stressing the “importance of participating in local politics.”

“Let’s work together to make local politics something that all of us too-cool-for-school New Yorkers simply cannot ignore,” Ms. Johansson said. “That leads me to very proudly introduce, speaking of too-cool-for-school, a man that understands the very essence of what I’m talking about and has proven that local politics can be topical and hip, by most recently welcoming a rush of young, fresh faces into the community board, Manhattan borough president and future mayor of New York City Scott Stringer.” Mr. Stringer kicked off his remarks by joking he’s glad he doesnt have to compete against Ms. Johansson

“I’m so glad that Scarlett Johansson assured me before we walked in, she will not be a candidate in 2013,” he said.

His wife, Elyse, let out an audible sigh.

“Elyse, I’m your second choice, I’m OK with that,” he said with a smile.

Then, Mr. Stringer got serious and told the crowd of donors about his plan to “take back City Hall” and saying he expected to raise the maximum amount for his campaign war chest through the city matching program.

“Because of the thousands of people participating in the last couple of years, this campaign will have all the resources necessary to take back City Hall and deliver it back to the hands of the people of this city, who want a better government, a government that is progressive, a government that is inclusive and realizes that the primary responsibility is to make sure that the people of this city can live their dreams.”

Before the crowd of mostly white, fairly fashionable types who packed under the blue and white cabana rooftops of the hotel’s ground floor bar, Mr. Stringer outlined his vision of the ideal future mayor for the post-Bloomberg era.

“Part of what the next mayor of the City has to do is, fan out into all of our communities, every one of them, bring this city together, plan together, work together. Stakeholders around the table building this city, all of us, hand in hand, that’s what our campaign is going to be about,”

Mr. Stringer, who has been positioning himself as a liberal opponent to Mayor Michael Bloomberg on a wide array of issues, couldn’t resist ending his speech with a jab at the current occupant of City Hall.

“I am very excited tonight that hundreds and hundreds of you are with us to begin what I believe is going to be a very exciting journey. You see, if you think about the next 20 years, by 2035 we’re going to grow this city by a million people and, by 2030, we’re going to speak perhaps over 200 languages in this city. It’s amazing,” he said. “By 2025, it’s possible, it’s possible that Mike Bloomberg may not run for re-election, so we got to get it together Democrats.”

Loud applause accompanied Mr. Stringer’s exit from the podium. Amid the cheers, a lone voice admonished Mr. Stringer about the closure of St. Vincent’s hospital 2020.

A small band of hospital protesters has also been doggedly demonstrating against Christine Quinn, the council speaker and likely rival to Mr. Stringer in the upcoming mayor’s race. Following the speeches, Mr. Stringer accompanied and a large bodyguard accompanied Ms. Johansson through the packed crowd to a small gated room off to one side of the bar.

As we made the rounds in the main room, we spotted Julie Menin, a community board chair who’s mounting an effort to replace Mr. Stringer as Manhattan borough president. We asked if she’s expected Mr. Stringer to endorse her campaign. Ms. Menin demurred.

“Right now, it’s very early on,” she said. “I’m just happy to be here and delighted to be at the event.”

Ms. Johansson only emerged from her gated section of the soiree to exit the fundraiser accompanied by her security team, brother and elderly grandmother, Dorothy Sloan, who worked on tenant advocacy and became friendly with Mr. Stringer over two decades ago.

Mr. Stringer didn’t make such a quick departure from the party. He was one of the final guests remaining when we left about an hour after the fundraiser’s scheduled 9 p.m. stop. Before leaving, we chatted with Mr. Stringer and asked if it was safe to say his speech indicated he was finally making his widely expected mayoral run official.

“What?” he asked playfully before denying he has his eye on any particular position in city government.

“I just talked about–I’m going to be running for office in 2013,” Mr. Stringer said. “We haven’t announced anything officially, we’re just raising some money and keeping our options open.”

We initially assumed Mr. Stringer’s speech was a definite declaration of his mayoral intentions. Something must have been lost in translation. 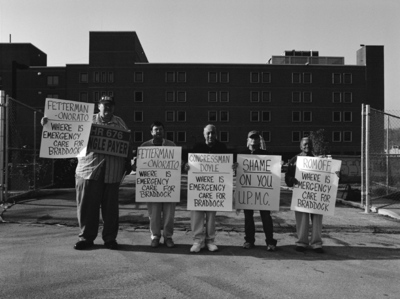