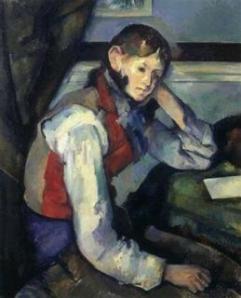 Serbian police believe they’ve found a work by Cézanne worth at least $109 million, which involved in one of the biggest art heists in recent history.

The painting, according to Reuters, is alleged to be Boy in a Red Waistcoat, which was stolen in 2008 from the Zurich gallery Emil Georg Buehrle. Three other paintings were stolen during the heist, conducted by three masked robbers. While two works (by Claude Monet and Vincent Van Gogh) were discovered a few days later, the Cézanne and another work by Edgar Degas, had not been retrieved.

The work, painted around 1888, depicts a young boy in traditional Italian waistcoat with a blue handkerchief and belt.