Twilio developer evangelist Rob Spectre was sitting in a plane on the runway this morning at JFK Airport when a large flying object tore out of the sky and thundered overhead. “Holy *shit*. I was right under the Enterprise as it was landing at JFK. Incredible,” he tweeted, and scrambled to upload the video to YouTube.

The flying object was indeed the shuttle Enterprise, which touched down without incident in New York this morning after buzzing over Long Island.

In the video, the Enterprise starts as a dot among the clouds and then appears to speed up as it approaches the window of Mr. Spectre’s plane. Mr. Spectre and his seatmates can be heard marveling Double Rainbow style: “Holy crap dude. Incredible. That is unbelievable. Ho-ly shit. My God.”

Betabeat intern Ben Weitzenkorn also happened to catch a glimpse of a low-flying aircraft over the Hudson as he was coming out of the subway near Times Square this morning. “It was huge and completely unexpected,” he said. “It was almost gone before I realized what it was… You don’t expect to see an aircraft piggy backing on top of another one like that.” 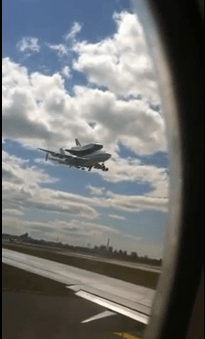