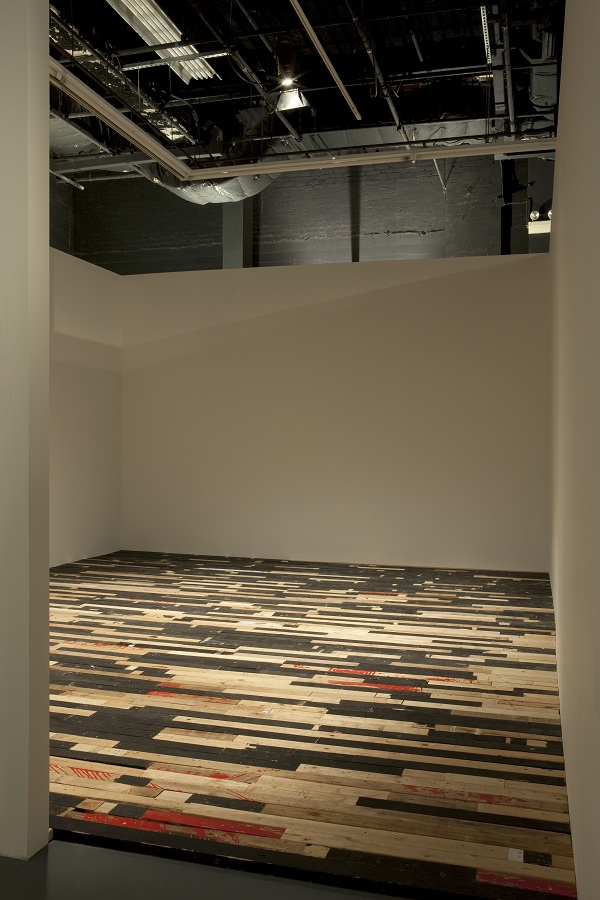 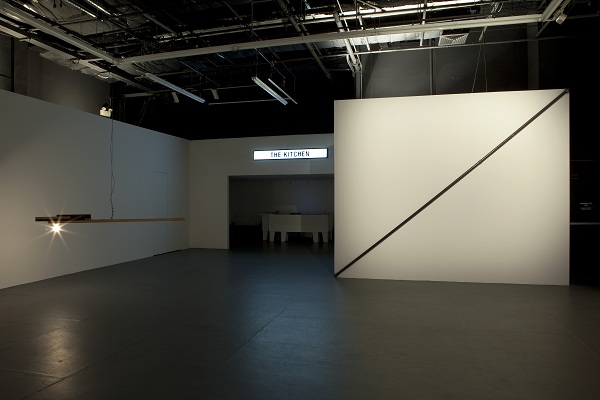 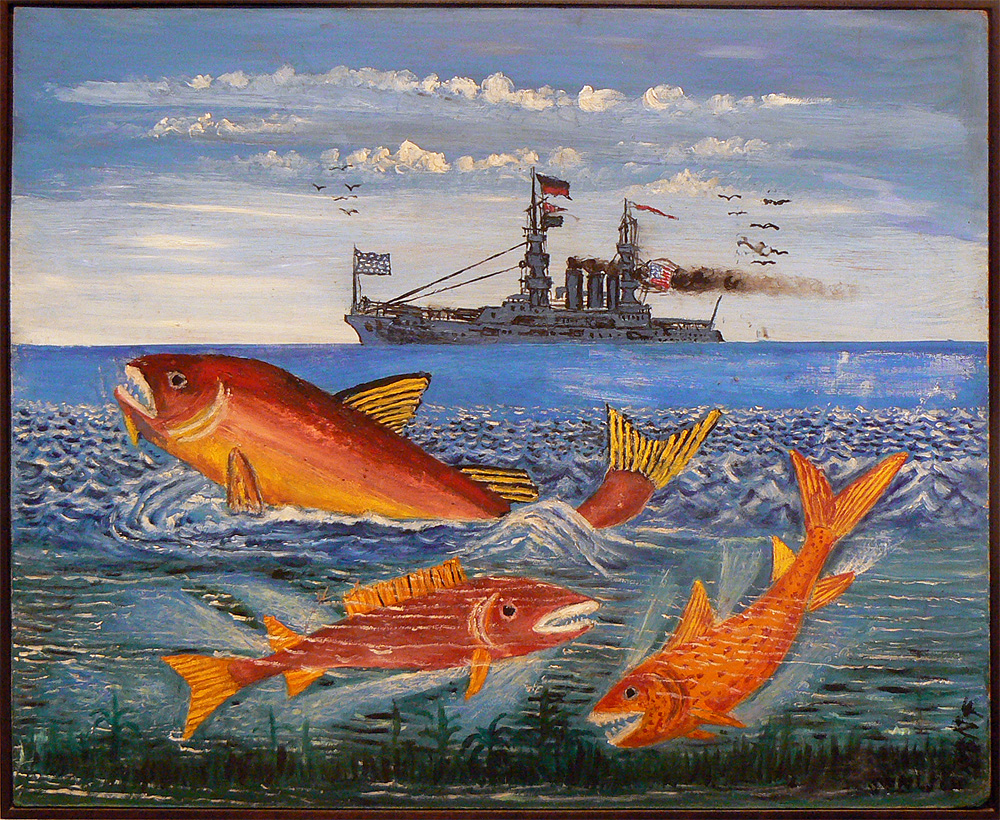 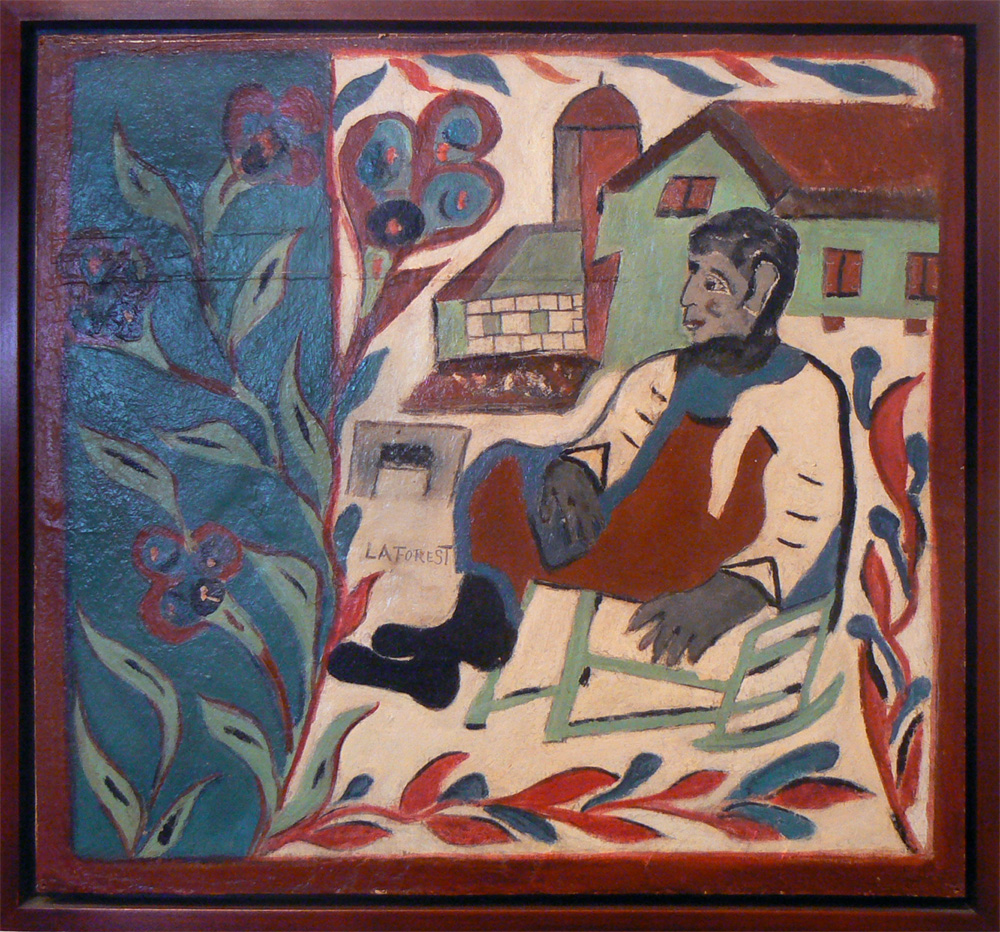 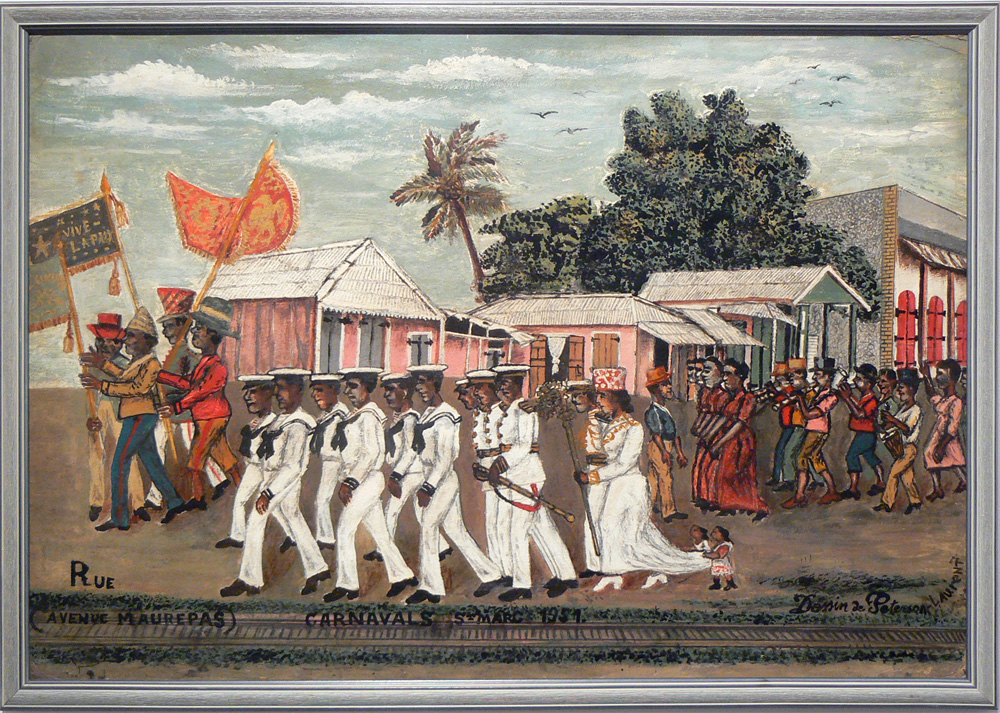 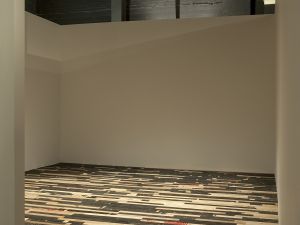 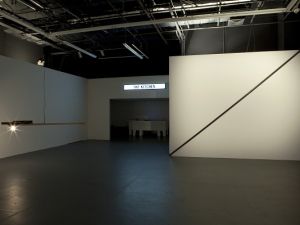 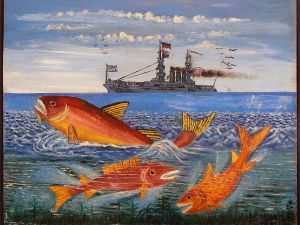 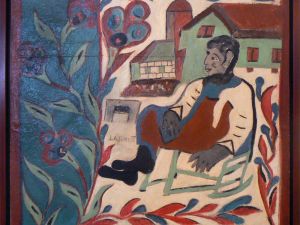 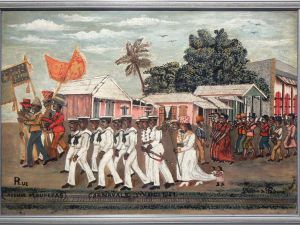 There’s a magic show playing at the Kitchen. Using only such materials as the space happened to have in storage—steel pipes, ratty pedestals, wooden shims, fixtures, light bulbs, extension cords and two-by-fours, in a Chelsea-local palette of black, blond, silver, red, and gray—sculptor Virginia Overton, working with Kitchen curator Matthew Lyons, has transubstantiated arrangements into compositions, diagrams into actions and objects into ideas.

In Untitled (light), a single, perfectly horizontal plank hangs from a thick steel wire looped through a single steel screw-eye. The screw-eye is covered in peeling black paint, and the plank is about four feet off the floor, as high as the top of a stone wall beside a country road—not high enough to obscure the view, but too high to step over. On one end of the plank sit two asymmetrical stacks of smaller, black-painted lumber, and directly underneath them, screwed to the plank’s underside, is a glowing yellow light bulb, whose cord spirals back up around the steel wire before skipping from duct to duct to an outlet somewhere out of sight.

Because the plank is angled toward the door, it looks, at first, as if the screw-eye were attached exactly in the middle; and because the plank is weighted on one end but still horizontal, this makes it look like a magic trick. But when you notice that the screw-eye is not, in fact, in the middle—it’s closer to the heavier end—the effect becomes even more magical. As with any well-designed optical illusion, revealing how it’s done actually augments the effect. The miracle of what can’t be done becomes the miracle of what can.

Likewise, Untitled (schedule 40), a 19-foot-long black steel pipe, with couplings at the ends, affixed diagonally to the wall, amazes not because it’s difficult to see how it’s affixed, but because simply affixing it makes it art. There’s all too much art in the world that merely looks like art, but it’s not very often that you see art that succeeds in being art by looking like art.

Communication is another problem: Confronted by a bottomless chasm between self and other, a person can extend only a cautious framework of half-formed failures of gesture in the hope that ultimately, miraculously, they’ll form a bridge to the other side, supported by nothing. Untitled (pedestals) consists of eight dirty white wooden pedestals, of not-quite-identical depth and varying heights—they could be any block of Midtown—crammed tightly between two walls, about two feet off the floor, with the help of a number of wooden shims. Just beside the pedestals, Untitled (2×4 floor) consists of two-by-fours of various lengths, some painted solid black, a few spattered with red, laid down in an irregular zebra pattern that looks like magnetic code.

All of these pieces—even the wooden floor—are simple, singular ideas, so fully thought through, so consistent and so clearly rendered that even aesthetically they look singular. But Untitled (pipes) works differently, showing instead the profuse complexity that naturally emerges when a single idea is not distilled but repeated.

Several dozen black-and-silver steel pipes lean against the wall. They range in length from four-and-half to 12 feet, and in diameter from a pinky’s width to a racquetball’s; some are marked as if heraldically with bars of white or black tape or scrawled numbers. They’re all propped against the same metal beam on the floor, so that they all hit the wall, according to their length, at different angles: the single longest pipe, speckled with silver where its black paint has chipped off, extends just past the top of the wall; the majority of the pipes, at nine or 10 feet long, mark out an overall shape; and the shorter pipes discreetly hit at sharper angles. From the front, it’s a fencelike plane; from the side, it’s splayed like a pack of cards. Lit in such a way as to cast clear, straight shadows on the white wall, the piece creates a discrete tunnel of complex, receding triangles, as if the problem of the artist were not to build up meaning, but simply to choose to frame it.

The quietly delightful exhibition Haitian Masters at Edward Thorp Gallery brings together the paintings of four recognizably related but wildly different 20th-century, self-taught Haitian artists. Wesner La Forest used raw but often muddy colors and intermingled depths of plane to create strangely but delicately composed small paintings on cardboard or panel. In Village Scene, a few flat green houses with orange roofs sit under an undulating deep blue that could be sky or sea; a homely Madonna’s bow-curved, red-sleeved arm in Mother and Child and Flowers both protects her baby and pushes him forward, like an offering. Peterson Laurent combined meticulously accurate proportions with tropical colors and compressed perspective to make exuberantly fantastical tableaux of grimacing ruby fish sporting in front of American battleships, or, as in Carnivals, black-outlined sailors and civilians marching happily past the tin-roofed pink houses of St. Marc. Bourmond Byron’s heavily varnished scenes have the sentimental comfort of Chagall and the uncanny lean of Soutine. And Odilon Pierre’s more sharply vertical constructions tend almost toward abstraction in their profuse floral colors, but he also produced powerful, concrete symbols like Red Radiant Hand #1—a single palm covered in either paint or blood—and his lovely Crowd Scene, which uses black dots and red, yellow, blue and green stripes to conjure a group of women in long dresses with their arms raised.