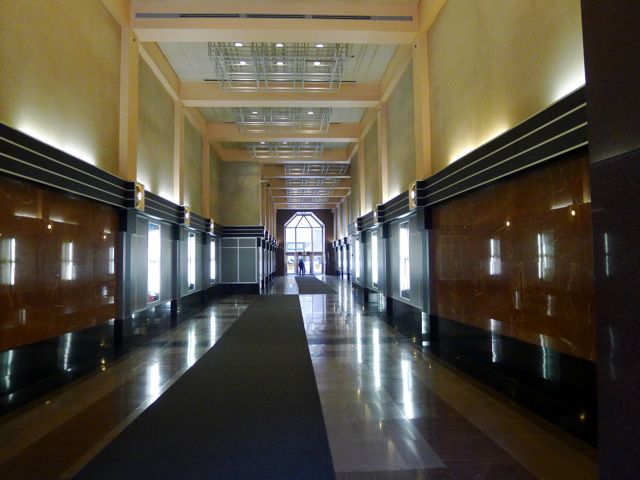 Last Thursday, before an expected vote on the 6½th Avenue plan, The Observer decided to take a tour of the stretch, which starts here, inside the CitySpire building.
jhanasobserver 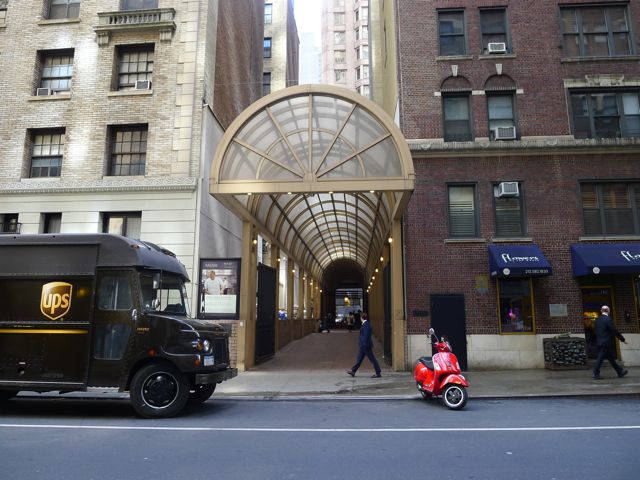 This awning keeps passerby covered until they get to the lobby of a residential building on the other side.
jhanasobserver 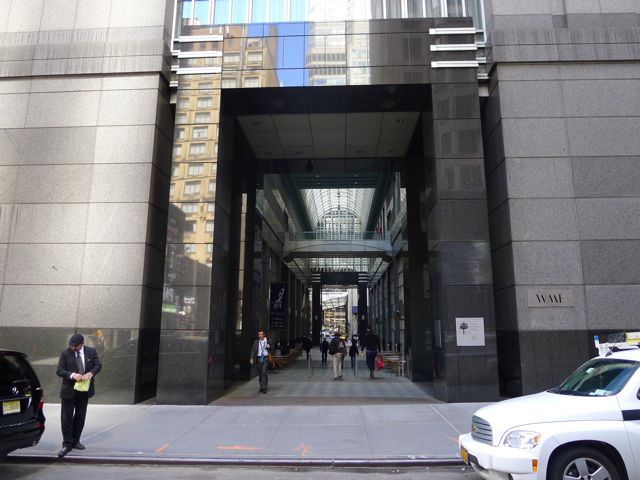 A nice arcade inside an office tower.
jhanasobserver 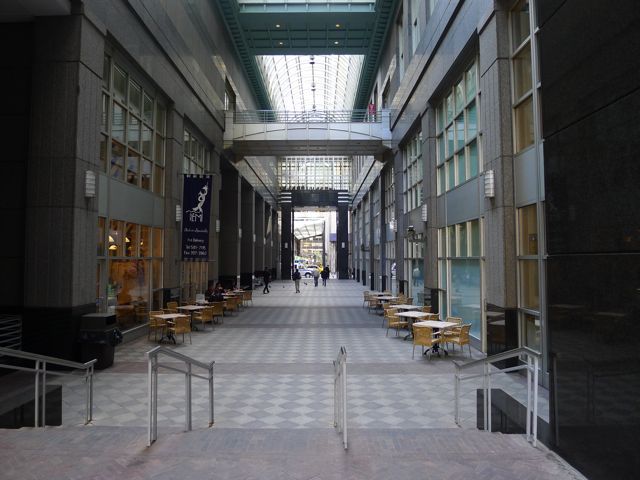 From here, you can see all the way to the end of the "avenue," on 51st Street.
jhanasobserver
Advertisement 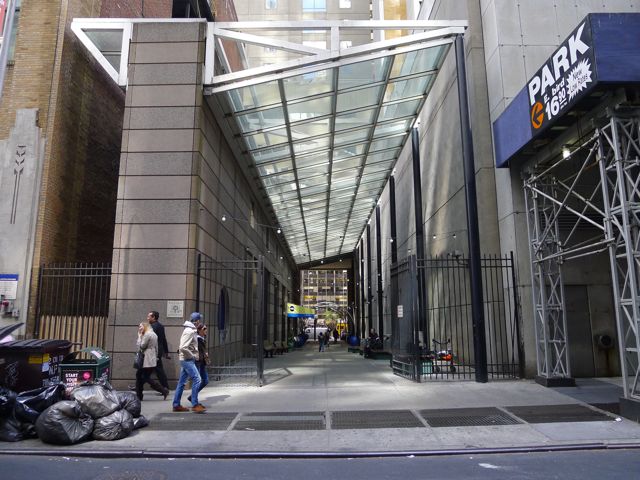 Another awning, this time with a few shops and a bar built in for scenery along the way.
jhanasobserver 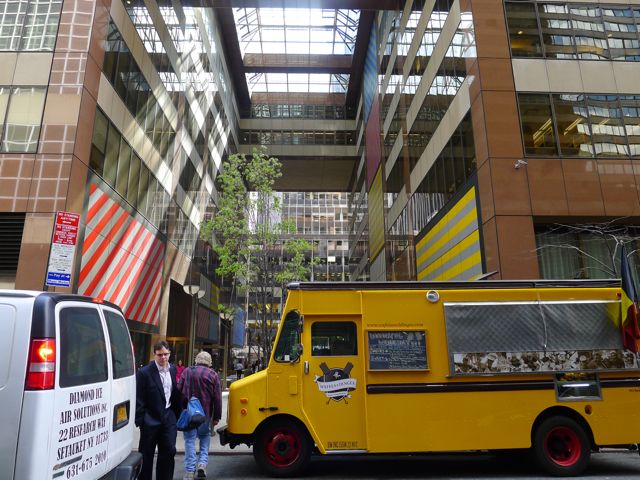 In front of the UBS gallery, the last POPS on the trip. Notice how the waffle truck, delicious as its offerings are, is blocking the passageway, causing pedestrians to bob and weave. No longer under the new plan.
jhanasobserver 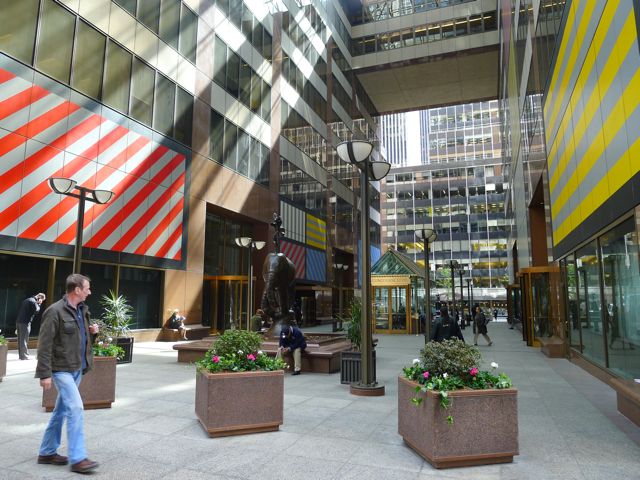 The UBS Gallery is the mother of all POPS. Those are Sol Lewitt paintings on the walls, with ample sculptures, seating and other amenities. If only all landlords were this conscientious.
jhanasobserver
Advertisement 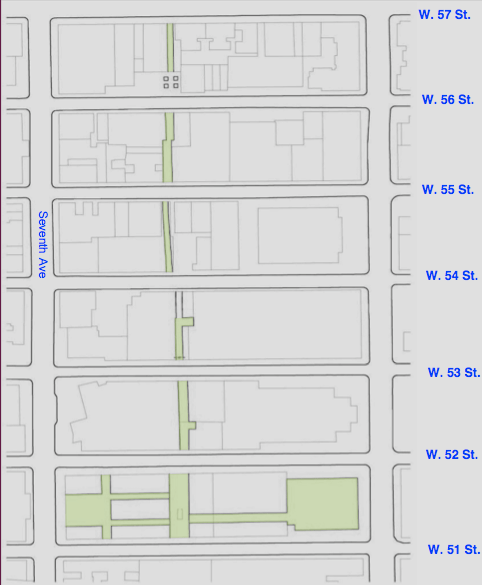 A map of the proposed pedestrian passageway.
jhanasobserver 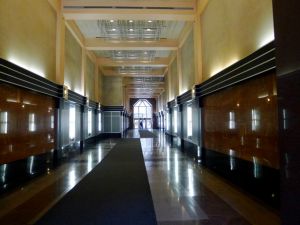 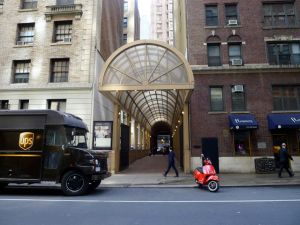 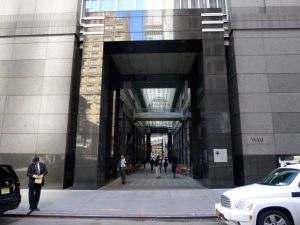 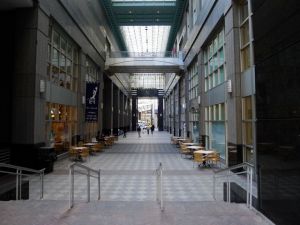 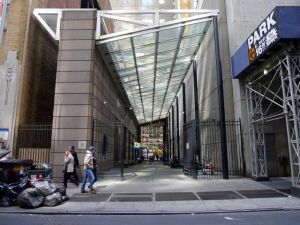 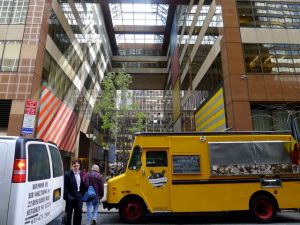 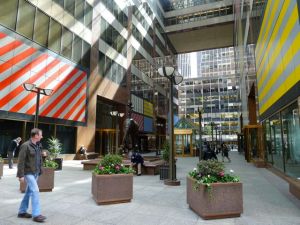 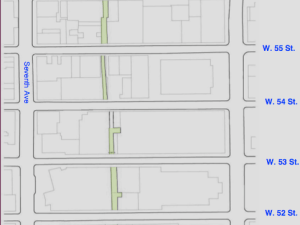 The city’s Department of Transportation is putting the brakes on its plan for 6½th Avenue, yielding to oncoming concerns about the implementation of a plan to construct new crosswalks that would connect pedestrian plazas running from 51st to 57th streets between Sixth and Seventh avenues. The plan was due to be put to a vote at Community Board 5 last Thursday, but the department has delayed its presentation for a month to help pave the way for its approval.

There had been some concerns about whether or not traffic impacts on the corridor had been sufficiently addressed and what the best means to mitigate traffic at pedestrian crossings might be. “It’s not going to be quite so simple at the full board, and they wanted to take a step back and make sure they had all the answers,” one community board member told The Observer. As we previously reported, the board’s transportation committee approved the 6½th Avenue plan unanimously.

A presentation and full board vote is expected at next month’s board meeting, on May 10. It is not yet clear whether that would slow down plans to install the crosswalks this coming July.

Among the issues being considered is whether to replace the proposed stop signs on 51st Street with traffic lights. This may sound like a disaster for drivers, but it is actually considered an improvement over a stop sign. The crossings at 51st and 52nd streets are the busiest along the entire corridor, and there are concerns that with a stop sign pedestrians might stream through the intersection during lunch or rush hour, preventing cars from ever passing.

A traffic light would instead create designated times for both walkers and drivers, creating a smoother flow of traffic and better conditions for both vehicles and pedestrians.

For those who still fear a traffic jam nightmare, look no further than 57th Street, where mid-block traffic lights have already been installed between Fifth and Sixth avenues and Sixth and Seventh avenues. This has not only improved pedestrian safety but also reduced traffic times because drivers are contending with fewer jaywalkers. And since New York traffic is a game of hurry-up-and-wait, what is another stop light?

That is why the department continues to reject calls for yield signs at the crosswalks. While some board members have expressed concern about the need for late night traffic to have to come to a full stop at the intersections, the department believes that is the only way for the crosswalks to work to keep pedestrians safe.

As one transportation source put it to The Observer, “Yield signs? Are you kidding? New Yorkers view yield signs as green lights. They’re blind to them. It would never work.”