“When it seems as if I’m sabotaging my own career,” Jeff Goldblum was saying, leaning back in his booth at Josephine Café Français in Tribeca, “you find out that it’s still very much alive and flourishing. I’m in a growth spurt. I’m actually very open to this new creativity.”

In a black leather jacket and a faded pink Thelonious Monk shirt, Mr. Goldblum looked astonishingly young for a man who will be turning 60 this year. But the bigger surprise was his candor about his career. After becoming an unlikely sex symbol in the ’80s and ’90s for movies like Jurassic Park, Independence Day and David Cronenberg’s The Fly, Mr. Goldblum had fallen into semi-obscurity in the new millennium—popping up in the occasional indie film (Igby Goes Down, The Life Aquatic) or Broadway show (Pillowman), but mostly languishing in a number of unremarkable flops.

“In fact, I think Leonard actually likes teaching,” Mr. Goldblum continued, as it dawned on us that he wasn’t talking about himself at all, but his character in Theresa Rebeck’s Broadway play, Seminar, a role he’s set to take over from Alan Rickman on April 3. Leonard is a caustic, lascivious, ex-literary superstar begrudgingly teaching a private creative writing class to five precocious youngsters, whose aspirations range from getting a story in The New Yorker to getting a topless profile in New York magazine.

The actor and the subject share more than a couple character traits. Much like Leonard, Mr. Goldblum is resurfacing after a career comedown. And like Leonard, he’s appealing not so much to his own demographic but to a younger generation, having popped up in a string of cult comedies in recent years, including the animated Adult Swim series Tom Goes to the Mayor, the semi-improvised FX sitcom The League and IFC’s Portlandia. In addition to a brief stint as the lead on Law & Order: Criminal Intent last year, he has a recurring role as Rachel Berry’s homosexual father on Glee, and is now set to play Sarah Silverman’s ex-boyfriend on her newly-announced comedy for NBC, Susan 313. Oh, and he appears in the occasional FunnyorDie sketch. In the latest, he plays a “dunkologist” who tells L.A. Clipper Blake Griffin that a Kia Optima could dunk over him, easy.

The actor was waving his index fingers in little circles in our direction. Over the course of a lengthy lunch, we learned that this is the signal Mr. Goldblum gives when it is someone else’s turn to talk.

Since one of Seminar’s big themes is telling the hard truth, we decided to answer Mr. Goldblum honestly. We hated L.A., we told him. Everyone was like his character in Annie Hall: spiritually smug Namaste yoga-ites who can’t leave the house without their mantra.

“Mmm-hmmm. So in general, you aren’t a fan of ‘Namaste, yoga stuff?’” Mr. Goldblum asked slowly. You don’t want Jeff Goldblum asking you something slowly. It’s very intimidating. It’s also a technique he is sure to deploy frequently in his new role, which Alan Rickman played with a certain Professor Snape-ian sneer.

We were wondering after seeing the show how Mr. Goldblum could ever pull off that kind of intimidating presence. But as he raised an eyebrow over our coffees (his: black; ours: mocha with whipped cream), it was clear that wouldn’t be a problem. We soon learned that the actor himself was from L.A. and was very much a “Namaste yoga-ite”—he’s been practicing since his late teens, and meditates regularly. In the ’80s, Mr. Goldblum was among a handful of devoted celebrity disciples of Swami Satchidananda, founder of Integral Yoga International.

We backpedaled. “Not that everyone from L.A. is like that! We’re just cynical about people who need to flaunt their serenity.” Ominously, the actor had stopped talking. We were five minutes into the interview.

“Actually, we just wanted to let you know that we remember you from Annie Hall,” we continued, feigning a certain jocularity. That got a smile. “Of course, that was after you played Freak Number One in Charles Bronson’s Death Wish, which most people forget was your first screen role …”

Mr. Goldblum was just staring at us. It was getting intense.

We mumbled something about we had been in love with him ever since we saw Jurassic Park 12 times at the dollar theater.

That got him talking again.

“That’s really great!” he replied, suddenly thawing out. Another thing Mr. Goldblum shared with Leonard: a certain propensity for flirting with young women (or that’s how it seemed to us). The last person Mr. Goldblum was linked to romantically in the press was Lydia Hearst-Shaw—who is 32 years his junior—and he seemed eager to market himself as an older sex symbol. If so, it’s certainly working.

“Jeff is a sexy guy,” said Seminar’s director, Sam Gold, “and I think he’s a great romantic partner for some of the characters in the play.” The only two women in Seminar are recent college graduates, but Mr. Gold had a point.

Mr. Goldblum denied any conscious strategy to appeal to a younger demo. “I’m lucky to have gotten these few opportunities recently, but it’s not a plan, it’s not an agenda, no,” he said, before attaching an addendum. “But I always think it’s not a coincidental thing.”
But there is no doubt he’s entered a different stage in his career, and life. “I’ve been in New York so much more; I like being here, I like seeing the shows.”

Like Leonard, Mr. Goldblum has done some teaching. He founded the Fire Dept. theater company in California, and taught at the Playhouse West. He takes in a small number of students at UCLA and has taught at New York University and Carnegie Mellon. He himself studied under the famous Sanford Meisner after moving to New York at 17, and he sat in on classes taught by Lee Strasberg and Stella Adler at the famous Group Theatre.

“I had a lot of tough love teachers like Leonard,” he told us.

Mr. Goldblum is that rare character actor who always appears to be playing a version of himself. He has often been cast as scientists, teachers and various other attractive nerds. Every character he has played has been a bit Jeff Goldblumy (that’s a good thing), at least when he got through with them. They inherit part of his structural DNA, and he gets a piece of theirs, not unlike his botched experiment in The Fly. For example, most of his characters speak in exactly the same distinct way Mr. Goldblum does: fast, peppered with a lot of “ums” and “uhs,” occasionally picking a random word to elongate. (His syntax reminded us of Mr. Goldblum’s other great passion: jazz piano.)

That’s why Mr. Goldblum, like his Annie Hall co-star Christopher Walken, is such a perfect fit for the alternative comedy scene, which places a high premium on the meta-celebrity: someone who is in on a joke, in which the punch line is themselves. All through lunch, The Observer couldn’t shake the sense that we were talking to a Jeff Goldblum character.

Like a jazz musician, he free associates—smoothly riffing off of whatever ideas are thrown his way. Occasionally he’d just throw something out there and see how we reacted.

“So, you’re Jewish, how about that?” he asked, completely out of left field. Then we started talking about bat mitzvahs. Then hallucinogenic drugs. Then Pride and Prejudice.

He clapped his hands, and encouraged us to continue to indulge our passion for singing (but we don’t sing …) and acting (but we don’t act …), and painting (we began to wonder if Mr. Goldblum realized he was being interviewed by someone who had already chosen a profession in writing).

He seemed to be loosening up. When we lobbed a soft-ball question—what motivates his character, Leonard?—he replied, “I’ve been immersed in this for a while, so I have thoughts aplenty, amassed up into this point in my current thinking, which may evolve over the next week.”

We believe that was all one sentence.

Even if he didn’t plan on a second coming as a pop culture figure in his late 50s, Mr. Goldblum certainly has the gig down. He’s irreverent. He’s unpredictable. He’s funny, and weird, and sexy.

After a decade of maintaining a low profile, he finally seems to have remembered his mantra. 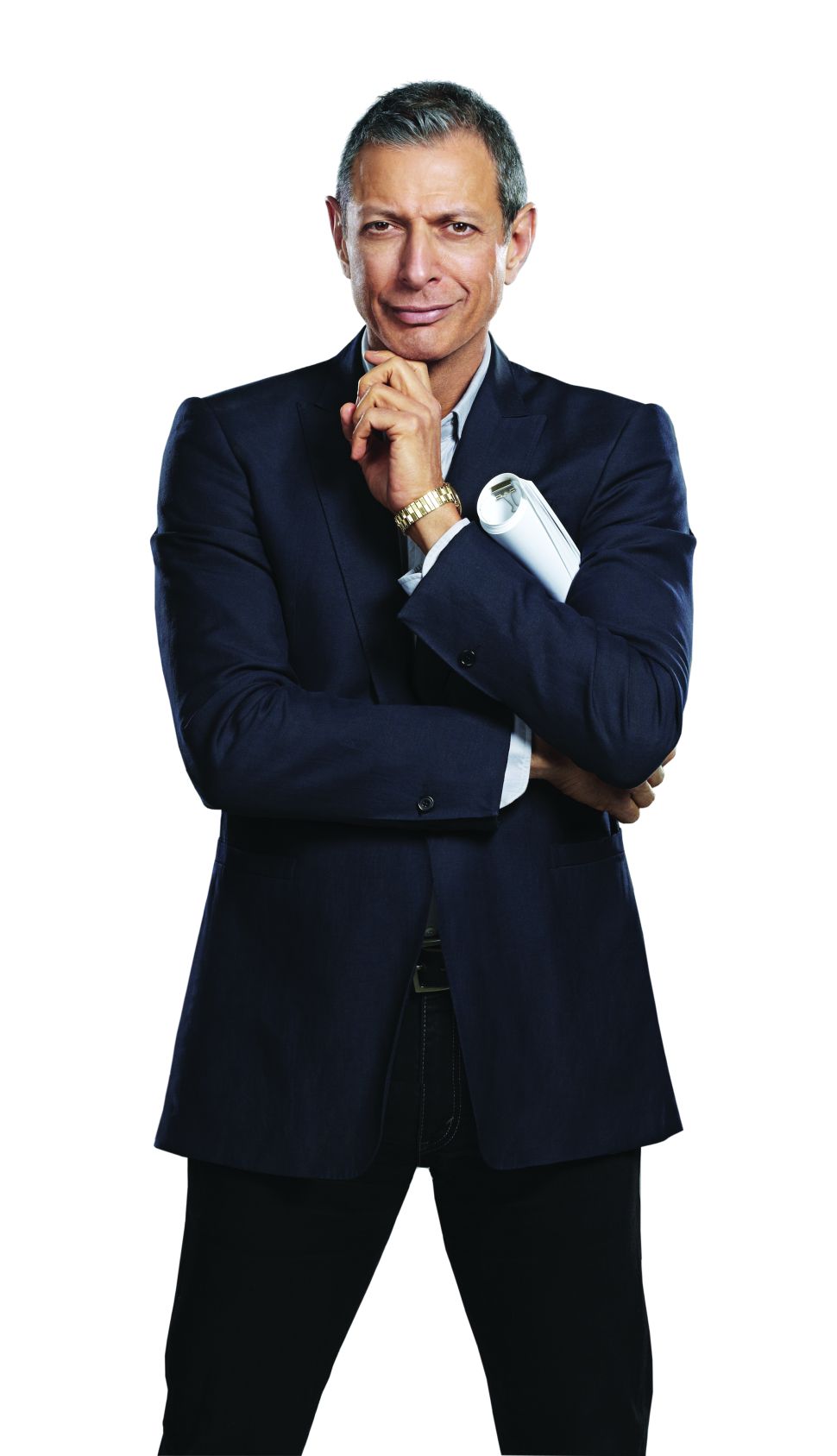