“But I am French!” a tourist announced at the door of Alice Tully Hall Monday evening. His name was not on that most sacred Excel spreadsheet, the guest list, for the Film Society of Lincoln Center’s gala tribute to Catherine Deneuve. “This actress is French! I am French!” he told the doorman. His face showed that singular Gallic disdain, exasperated that Americans should be privy to an icon as beatific as Madame Deneuve. A security guard intervened, sending the fuming Frenchman on his way.

Inside the atrium, however, a reverent group was congregating, awaiting the entrance of the filmic doyenne. In true French fashion, she kept them waiting.

In the meantime, a steady flow of Hollywood elite appeared, in black-tie best, to pay tribute to Ms. Deneuve and her distinguished, six-decade career.

Some were old friends. Slightly bleary eyed, Susan Sarandon arrived to show support for her colleague and erstwhile on-screen amante. When a young reporter asked Ms. Sarandon if she had ever worked with Ms. Deneuve, we could practically see the hair raise on the nape of the actress’s neck, a Rottweiler urge boiling barely beneath the surface. “Actually, we filmed a very famous love scene in the ’80s,” she barked with righteous indignation, referring of course to her canonical tryst with l’actrice in The Hunger.


The Observer asked Ms. Sarandon about her experience working with Ms. Deneuve. “Everybody remembers she’s gorgeous, and she has this reputation for being kind of very cool, but she’s actually really funny and a really game gal,” Ms. Sarandon said. A faraway look crossed her face. “That was before I had children, so it was a lot of fun. A lot of partying.” In her speech at the tribute, Ms. Sarandon would recall that after one particularly raucous evening, Ms. Deneuve was the only guest who returned the next day to help clean up le grand désordre.

Others, however, had never met Ms. Deneuve personally. “I think my impression of Catherine Deneuve is that she really is ageless. She’s timeless. I think she’s one of the great cinematic actresses, because her face, and her art has changed,” Glenn Close told The Observer. Somehow, their paths had never crossed, and Ms. Close was eagerly looking forward to meeting the woman who had been an inspiration for her own career, albeit from a distance. “I wouldn’t be here without the likes of Catherine Deneuve.”

Despite the praise, Ms. Close could not recall a single scene from Ms. Deneuve’s prolific film career. “I should have studied up on it before I came,” she said, quickly moving toward the cocktail reception.

Still others were admirers from afar. Ali Wentworth recalled attending a Catherine Deneuve film festival in Paris several years ago. “I felt so inadequate, and I felt so un-chic and so un-elegant that I swore I wasn’t going to watch another Catherine Deneuve film until I got my act together. You know, she epitomizes that kind of beautiful, ethereal, Parisian thing. You know Americans, we’ll never get it right.”

Director François Ozon, who worked with Ms. Deneuve on his film 8 Women, explained that Ms. Deneuve has come to encompass not only French cinema, but French identity. “She is the French woman! She was used for the Marianne, the symbol of France in the ’70s,” he said, Parisian pluck ringing clear through his heavily accented voice. “Do you know what is the Marianne?” he said. Visions of Delacroix, laurel wreaths—and of course liberté, fraternité et egalité flashed before our eyes. Yes, we know what is the Marianne, that allegorical fetish of French femininity and philosophy.

Indeed, while many jeunes belles have seen their stars rise in the Champagne landscape of cinematic iconography, Ms. Deneuve towers above the rest. Is she not still La Marianne? The Observer asked Mr. Ozon. He chuckled. “She’s still a Marianne, I think so. We can still say that.”

And suddenly, there she was. Amid the electric storm of flashbulbs, she appeared in a bright blue gown, her upper lip flexed with that peculiar Parisian mien. Catherine Deneuve, la grande dame Marianne, looked neither flustered nor surprised by her adoring fans. Immediately, many guests dropped their cocktails and scrambled toward the red carpet hoping for a glimpse of the actress. A Champagne flute shattered somewhere, with that grimace-inducing chime. “Ooh la la,” someone gasped, at the flute or the actress, or both.

Ever the glutton for punishment, we asked Ms. Deneuve if she thought Americans could truly appreciate French film. She was, much to our delight, graciously diplomatic. “Depends,” she began, “If it talks too much, maybe it’s a little boring, you know, for an American audience … There is less action in French films.”
Still, she has great faith in American cinephiles. “There are a lot of American people who love European cinema I think now,” she said with a pursed but warm smile and a slight nod.

Soon after Ms. Deneuve’s dramatic entrance, guests reached for one final mango chicken appetizer, set down their glasses and moved downstairs to the movie theater. Flanked by two massive bouquets of red roses, a screen reeled highlights from Ms. Deneuve’s career. Starting with her sing-songy eloquence in Les Parapluies de Cherbourg, through the perverse world of Roman Polanski’s Repulsion, toward ice maidenhood in Tristana and the sexual exploration of Belle du Jour, the audience was steeped in both the history of French cinema and Ms. Deneuve’s unparalleled repertoire.

Presenting Ms. Deneuve with the Film Society’s Chaplin award, Martin Scorsese proposed that the actress embodies the emotional experience of French film. “The adventurousness, the daring sense of life flowing from tragedy to happiness and joy and to acceptance from moment to moment, the timeless beauty, beauty so delicate that it seems impossible, but then it’s there, it exists. As I said, French cinema, Catherine Deneuve one in the same.”

Ms. Deneuve accepted the award with typical humility, after a standing ovation from the audience. “So much has been said, I don’t have much more to add, but to thank you again for honoring me tonight.” 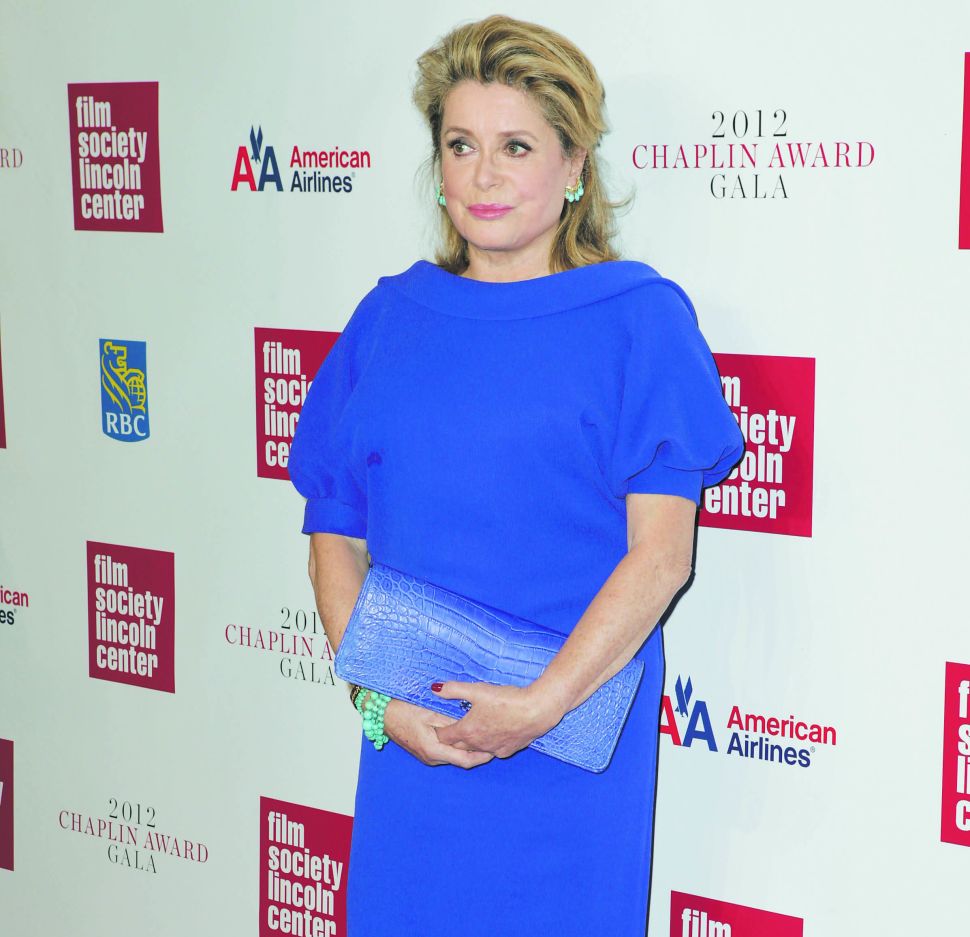