If you’re traveling between Grand Central and Times Square today, you might notice a little change on your normally drab S shuttle train. No, you aren’t Roger Sterling on acid. Think: Sound of Music. Or chocolate. Or watches. As part of a viral campaign for Swiss watch company Tissot, shuttle service has been suspended. Well, not literally: the interior and exterior of the train cars have been painted to give riders the sense that they’re 3,454 meters above ground riding on the world’s highest altitude train, the Jungfrau Railway in Switzerland.

As part of the promotion, Tissot is also giving away a Limited Edition Men’s Silver Quartz Watch (valued at $350) and a 30 Day Metrocard (valued at whatever MTA has hiked it up to this month) in an online sweepstakes. There’s no need to ride the shuttle for entry in the contest, which is good because vertigo was not on our top list of things missing from our daily Midtown commute. 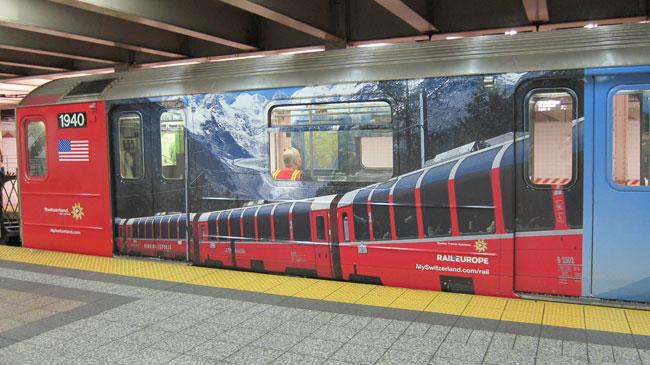