His paintings are hanging in an estimated one of every 20 homes in the United States. Fans cite the warm, familiar feeling of his mass-produced works of art, while it has become fashionable for art critics to dismiss his pieces as tacky. In any event, his prints of idyllic cottages and bucolic garden gates helped establish a brand — famed for their painted highlights — not commonly seen in the art world.

Kinkade, whose Media Arts Group was raking in upwards of $32 million a quarter a decade ago, preferred to describe himself as a “warrior for light.” In a 2002 interview he said that he used his talents to “bring light to penetrate the darkness many people feel.”

Though Kinkade was a wealthy family man and devout Christian there have long been hints of darkness behind the light. In 2009 the F.B.I. was investigating allegations that Kinkade had committed fraud and in 2010, he was picked up for D.U.I. Previously former employees and associates had testified that Kinkade was given to bizarre personal behavior, including heckling Siegfried & Roy, groping fans and allegedly urinating on a Winnie the Pooh statue at the Disneyland Hotel.

Thomas Kinkade didn’t lack for confidence in his worth and work. As Susan Orlean reported in The New Yorker in 2001:

If you see his paintings before you meet him, you might expect him to be wispy and pixie-like, but he is as brawny and good-natured as the neighborhood butcher. He has the buoyant self-assurance of someone who started poor and obscure but has always been sure he would end up rich and famous. He is so self-assured that he predicts it’s just a matter of time before the art world comes around to appreciating him. In fact, he bet me a million dollars that a major museum will hold a Thomas Kinkade retrospective in his lifetime.

Authorities won’t know the exact cause of Kinkade’s death until next week. On Friday, his family was reportedly “traveling to Australia and unavailable for further comment.” As of Friday they were said to be planning private memorials. 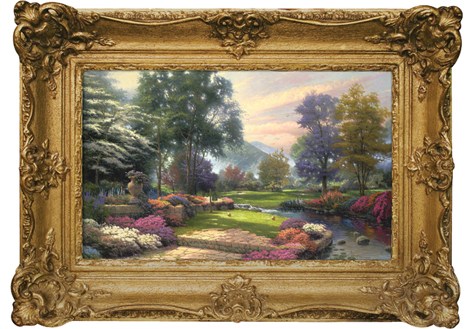