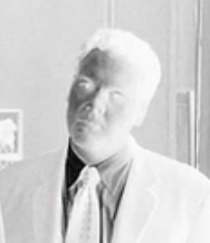 We’re big fans of Paper Monument‘s “See Something Say Something” feature, where writers perform a close reading of a single image (our esteemed colleague Andrew Russeth wrote one about a photograph of Robert Irwin’s project at the World Trade Center in Art in America). The latest one comes from Mike Powell, who chose an image quite near and dear to our hearts: the negative-space image of Vincent D’Onofrio as detective Robert Goren in the credits of Law & Order: Criminal Intent.

First, let’s get this wonderful description of what it’s like to pathologically watch Law & Order out of the way:

“There are nights when I have started watching an episode and not realized until about two minutes in that I watched the same one the night before. I don’t think I have ever registered surprise while watching CI. I have laughed approximately three times…”

And as for the negative image of Mr. D’Onofrio:

His head is hanging to the side. His features are washed out. In one mouse click in the editing room, he turns from virile detective to corpse. Criminal Intent usually begins with a three-minute segment that introduces the characters and sets up the crime before the credit sequence even runs. But it’s not until I see this negative image of Goren that I feel like the break between our real life and the people we are when we are watching CI is complete.

There’s also some, uh, personal information about Mr. Powell’s relationship with his girlfriend (hint: she calls the Detective Goren character “Bobby”). Read it all here.

Filed Under: Arts, Law and Order