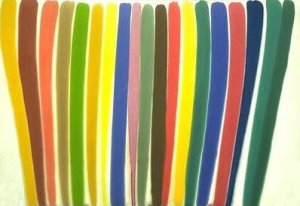 For much of his career, Color Field painter Morris Louis famously worked out of his home in suburban Chevy Chase, Md., before dying of cancer in 1962 at the age of 49. Now the Baltimore Museum of Art, just a short drive away, has added 21 Louis works to its collection, thanks to a gift from the estate of the Louis’s widow, Marcella Louis Brenner. The donation is comprised of two paintings, Silver III (1953) and Untitled 5-76 (1956), and 19 ink drawings.

The BMA, which has three other paintings by Louis, is planning an exhibition of its holdings by the artist for 2013.

Louis made his paintings in a 9-by-12-foot nook in his kitchen, according to artist Rodney Graham. In 2009, Mr. Graham presented a photographic light box in which he posed as Louis, recreating the artist’s process in grand style, carefully pouring paint down a canvas propped on a slope in a suburban living room.