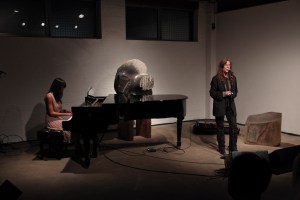 Patti Smith and her daughter at Noguchi Museum. (Courtesy PMC)

Patti Smith finished playing “My Blakean Year,” the fist song in an hour-long set with her daughter Jesse accompanying her on grand piano at the Noguchi Museum’s spring benefit last week. She was now staring intently at one of Isamu Noguchi’s sculptures that was on display in the room.

“I was wondering what the sculpture was thinking. I hit a bad chord. I was thinking it was going, ‘Ugh.’”

She explained that Noguchi was the favorite artist of her late husband Frederick Smith. Noguchi himself died on Ms. Smith’s birthday and she always felt a kind of karmic connection to him.

“Last night when Jesse and I were practicing,” she said, “interrupted by three cats with constant needs, we were reading a little poem that Noguchi’s father wrote when he was young. He came to America in 1893. He was very taken. As a young poet, he did miss his country, of course, and wrote this little poem with some degree of nostalgia sadness, and Jesse and I decided last night to make it a little song. With apologies to Noguchi’s father, we would like to do it in memory of him.”

She began singing: “Oh my friend/that wilt not come again/I’m alone in this cabin in the friendless universe/From the eastward/to the westward,” and here she cringed slightly, “Where is truthfulness?” Her voice cracked on the last note and she was out of time with her daughter, who had by this point ceased playing. Ms. Smith started to laugh.  “Sorry. I sang that all wrong. O.K. Sorry.” She turned to her daughter. “Can we try that part again? I’m sorry.” They tried it again. “From the eastward, to the westward, where—” another voice crack and a pause, but they kept going: “Where is truthfulness? The world impales—”

Her daughter slowed her playing and looked at Ms. Smith like, “you just screwed that up again” and then they both stopped.

“The next time I’m on Earth I’m not having musicians for children,” Ms. Smith sighed. “I could make tons of mistakes and no one would notice. Just barrel along. O.K. We’ll get it. From there.” They began again. “From the eastward/to the westward/where is truthfulness? Whatever.” They finished, by some miracle, and the audience, rapt by the humanness of it all, burst into joyous applause.

“So, I did apologize before we started. You thought I was being like the Red Queen in Alice in Wonderland, who goes, ‘Ouch’ and then she sticks a pen in her finger? Well, I was right. It’s important not to be perfect, you know?” Here she paused and looked reflectively at the sculpture again. Her voice turned sarcastic: “I mean, normally when I do a performance almost everything is technically perfect. This is a rare moment. Just consider yourself privileged.”

She followed that pep talk with one of her own songs, “Beneath the Southern Cross,” alone on acoustic guitar. She nailed it. When everyone was finished clapping, she sang in a shaky voice, “Where is truthfulness?” She was still trying to get it right.