Our generation, on an off-night. (HBO)

These questions regard last night’s episode of HBO’s Girls. Please answer the prompts with specific examples from Episode 6 (‘The Return’) only, though supplementary material will be accepted as a secondary source. Please write legibly. #2 pencils only. You have an hour to finish this test. See below for questions and example responses.

1. At home in Michigan, Hannah denies her physical needs to her parents, declaring, “I said I wasn’t hungry. You don’t know about me.” But in a private moment, she binges on food. Discuss nutritional sustenance as a metaphor and the body of the woman-child as a site of generational conflict and shifting power dynamics.

Hannah would do well to change her iPod from Robyn and Alanis once in awhile, because this guy named Bob Dylan once wrote a song about her.

Honestly, what could bridge the generational gap faster than Hannah realizing that some hippie with a harmonica was writing songs about her totally unique white girl problems 47 years ago?

“You used to laugh about
Everybody that was hangin’ out
Now you don’t talk so loud
Now you don’t seem so proud
About having to be scrounging for your next meal.”

Hannah knows how that feels. (Then there was a part about Napoleon in rags that doesn’t really apply here because I think it’s about Andy Warhol’s relationship to Edie Sedgwick). One thing we can say about Hannah is that she’s definitely on her own, like a rolling stone. And that she literally scrounges for her next meal, because who wants to give their parents the satisfaction of letting them know that you are indeed cranky because you are hungry?

If Hannah’s parents wanted to instill real world values in their daughter, they’d put on “Subterranean Homesick Blues” and tell her,”Get dressed, get blessed, try to be a success…twenty years of schoolin’, And they put you on the day shift.” THAT’S the real world.

On a related note, Hannah coming from Michigan is the first major deviation the show makes between Hannah and a semi-fictionalized Lena Dunham. Lena, unlike most 20-somethings who live in New York to ‘make it’ as starving artists, actually grew up here with respected parents in the art world. I know there’s a lot of criticism about the show’s nepotism; of Girls being just a diary entry of Lena’s life put on screen. But for someone who hasn’t experienced that cocktail of dissociation that burbles up when you go back home to visit after living in the city, she nails it. Everything from the delusion (“You are from New York, you are just naturally interesting…the least interesting thing you say is more interesting than the most interesting thing he says,” is our protagonist’s pre-date mantra), to the disdain (Hannah’s attitude towards Heather ‘making it’ with her dancing in L.A.), and denial (that her dream of ‘making it’ in New York is any more meaningful or successful than her childhood acquaintances.) Maybe that’s because Judd Apatow co-wrote the episode?

2. At home, Hannah learns of an old schoolmate from East Lansing High—Carrie, or Keri—who has disappeared at a resort. Discuss the metaphorical significance of the missing girl with particular attention to the cultural resonances coded in her name.

At first I thought it was a nod to all those girls getting abducted in Aruba, but none of them were named Carrie or Kerry though. So I’m pretty sure this was a subtextual reference to Carrie Bradshaw almost getting stoned to death in Abu Dhabi in Sex and the City 2. Wishful thinking, perhaps?

3. In this episode, Hannah’s parents, previously employed as comedic foils, are aggressively humanized when they are depicted engaging in sexual congress in a shower. But such activity is presented as hazardous when Hannah’s father slips and falls. Discuss the significance of this scene. How does the limp, naked phallus of Hannah’s father speak to wider shifts in the culture?

Hannah’s father, his sexuality, and his daughter’s relationship to said sexuality is a Pandora’s Box of bad-tummy feelings. First of all, who invites their daughter to their wedding anniversary? (And how creepy is it when her dad says, “Who better to spend it with than our best friend, who we just happened to create?”) We see that Mr. Horvath has some real attachment issues to his only daughter, and that Hannah doesn’t necessarily share them…though at dinner, Mr. Horvath does a 180 and seemingly has no faith in his daughter’s talent or ability to survive in the real world. (But maybe he was just feeling rebuffed from Hannah wanting to go on a date rather than watch her parents quote Annie Hall at each other?)

Hannah’s ex, Elijah, previously told Hannah that her dad was gay, and this episode did nothing to clear up that line. In the shower, it sort of looks like Hannah’s dad is penetrating his wife anally, but he could also be doing her doggy-style, and the reason Mrs. Horvath looked so surprised and uncomfortable was because Hannah never gave her the lube for her menopause medication. (And he gave it to her free of charge! How romantic!). So we’ll just have to table that really queasy debate for another time.

To top things off, Hannah comes home after her date to find her father naked and unconscious. So she’s not only seeing her dad as a sexual being, but an impotent one. Add that to the horrific epiphany that your parents are mortal and could die any second, and I don’t think I want to talk about this subject anymore. Look, I made you this GIF instead.

Yeah, it should have been Smashing Pumpkins. Hannah totally would have gone to camp and told everyone her name was D’arcy.

5. Explore the issues of class and regional attitudes highlighted by Hannah’s sexual encounter with a guileless Midwestern pharmacist. What, if anything, is represented by her offer to digitally penetrate his anus, and why does he rebuff her?

I wouldn’t call Eric the Pharmacist ‘guileless’…he was kind of a dick, and definitely knew what he liked and what he didn’t. Some guys just don’t like it in the ass. Or they do, but you can’t just shove a finger into a stranger’s butt; it’s something you have to build up to. I doubt it has anything to do with living in a flyover state versus the dirty city. And come on, Hannah: “I’m tight like a baby?” Really? I just shriveled just thinking about that line, and I don’t even have a dick. To his credit, the ginger Eric has the sex with Hannah until completion (or so we are lead to assume), so way to take one for the team, bro!

On a somewhat related note: Eric’s response of “Come on!” to Hannah’s dirty talk is very similar to what Hannah yells at Adam last episode when he asked her to step on his balls. (“Are you fucking kidding me?!”) It’s like Hannah’s so conditioned to Adam’s kinky brand of sex that she assumes all guys fantasize about coming all over 10-year-old girls with Cabbage Patch lunchboxes. What’s unknown and what the show never addresses is what kind of sex Hannah actually wants to have. Maybe she doesn’t even know herself. 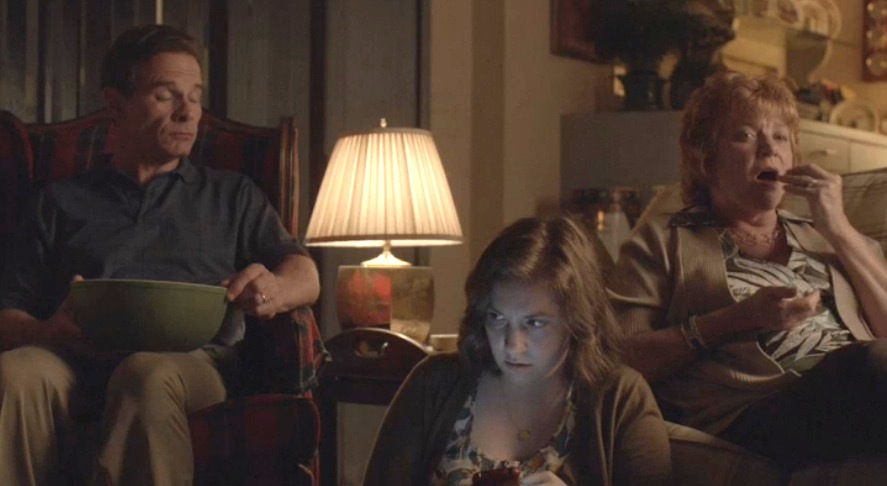