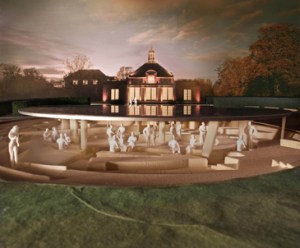 A rendering of the 2012 Serpentine Pavilion. (Courtesy Herzog & de Meuron, Ai Weiwei and the Serpentine Gallery)

Chinese artist Ai Weiwei is having a fine start to his week.

A Chinese court told the dissident artist today that it would hear his lawsuit appealing the $2.4 million fine the Beijing tax bureau levied against his company for tax evasion. Mr. Ai and many outside observers say those charges were politically motivated. As Reuters notes, it is extremely rare for any Chinese court to hear a lawsuit from a political activist. “I hope that they can make an independent verdict, but due to the interference of the tax bureau and the public security [bureau], it is difficult to say,” Mr. Ai told the wire service. No court date has yet been set.

Meanwhile, over in London, the Serpentine Gallery released renderings of the temporary pavilion—set to open June 1—that the artist has designed for the museum this summer in collaboration with Swiss architects Herzog & de Meuron, with whom he helped design the “Bird’s Nest” in Beijing for the 2008 Olympics. The structure will be partially sunk into the ground out in front of the museum, and will feature a cork floor and a flat, circular roof that is designed to collect rainwater. The water basin can be drained to provide a stage for performances, according to the Telegraph.

It’s a wild-looking building, and in a statement the museum declared it to be “the world’s first and most ambitious architectural program of its kind.”