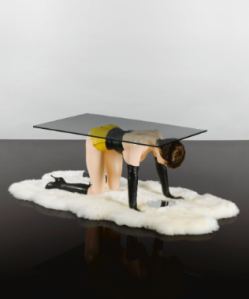 The Gunter Sachs Collection Evening Auction in London tonight saw some “frenzied bidding” as per Sotheby’s Twitter feed, and brought in a total of $56,353,203. While Andy Warhol’s Self Portrait (Fright Wig), topped the sale at $8.5 million (high estimate was $4.7 million), a risque 1969 table by Allen Jones also set a record at $1,5 million. Quite apropos for the objects of a playboy art collector who was famously married to Brigitte Bardot.

Warhol’s portrait of Sachs, a silkscreen in blue and bubble gum pink, sold for $2.01 million—three times its estimate, while portrait of Bardot sold for $4.8 million. Sachs supported Andy Warhol’s career early on, after a chance meeting in St. Tropez brought the two together and inspired the playboy to become a more serious collector of Pop art.

Of Sachs’s personal effects, one notable sale was that of his ’62 Riva Super Ariston launch “Dracula III,” the “ultimate playboy’s toy,” which was auctioned for $607,502.

Of the 41 items up for auction, three failed to sell.