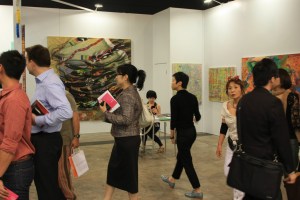 Annette Schönholzer and Marc Spiegler, the co-directors of the annual Art Basel fairs, announced today that they are readying a Hong Kong edition for May, 2013, which will replace the city-state’s popular and fast-rising Art Hong Kong fair. (Last year, the Switzerland–based MCH Group, which owns the Art Basel fairs, grabbed a 60 percent stake in Asian Art Fairs Ltd., the parent company of Art HK.)

Magnus Renfrew, the director of Art HK, has been appointed as “Art Basel’s Director Asia,” according to a statement released by Art Basel, meaning that he will run the Hong Kong fair, which will be on view May 23 to May 26 in 2013. Art Basel says the fair, which takes place at the Hong Kong Convention and Exhibition Centre, will feature about 250 international galleries.

Many of the world’s top-flight dealers may soon find themselves on the road for months at a time, with major fairs in Brussels, Cologne and Mexico City during April, Frieze New York taking place in early May, Art Basel’s Hong Kong entry situated at the end of May and the premier Basel fair taking place in its namesake city in mid June. And Armory Week, of course, continues to offer a plethora of fairs in New York in early March.

Asked by The Wall Street Journal about the May timing of the fair, which is situated around Hong Kong’s spring auctions, Mr. Spiegler noted that the convention center is tightly booked throughout the year with various events but he allowed, “This is an issue we’ve been working on.”