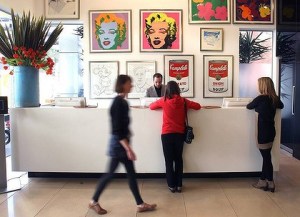 Warhols at the Olsen Hotel in Melbourne. Photo: John Woudstra (Courtesy The Age)

A marketing campaign by Art Series Hotels in Australia, which asked the American forger Tony Tetro to produce nine fake Warhols to hang alongside a real Warhol in the lobby, has been condemned by the Warhol Foundation.

According to Australian publication The Age:

Devised to enhance the hotel chain’s ”edgy” brand – an earlier publicity event invited guests to ”steal a Banksy” – the competition was launched last week and remains open until August 3. Hotel guests are invited to spot the real one and go into a draw to win a forgery or ”an original Warhol print” (not the one on display, according to the competition’s fine print). The forgeries are stamped and signed on the back as Tetro copies.

Mr. Tetro did five years in prison back in 1989 for producing counterfeit art.