WOOD-RIDGE – A crowd of Rothman revelers pressed together under the chandeliers here to watch their candidate receive a personalized endorsement from David Axelrod, senior advisor to President Barack Obama.

“Loyalty,” Axelrod said later in a crush of reporters who asked him why he’s getting into the CD 9 ring of Rothman v. Pascrell.

Rothman was the only member of the New Jersey delegation who endorsed Obama in the 2008 Democratic Primary.

So while Obama’s own role remains fuzzy, Axelrod made Rothman the first person he’s ever endorsed in a bloodbath between two Democratic incumbents.

Axelrod applauded Rothman for being with Obama for every progressive battle undertaken by the White House.

“I cannot think of one person who produces more for his constituents than Steve does,” Axelrod said.

Rothman stood onstage with Axelrod and state Senator/Wood-Ridge Mayor Paul Sarlo in the highway side catering hall and Sarlo hotspot where multicolor underwater lights project upward so when they turn the fountains on it looks festive.

“I’m proud to stand with Barack Obama,” the congressman said. “David Axelrod has asked me to ask you, would you help me get re-elected.”

The Pascrell Team harrumphed off the Axelrod embrace as a virtual non-event.

“Considering that last week’s rally for Bill Pascrell with Bill Pascrell as the main speaker drew over 1,000 people, today’s ‘rally’ sounds more like a staff meeting,” said Pascrell Campaign Spokesman Sean Darcy. “Bill Pascrell has the support of police, teachers, fire, laborers, carpenters, plumbers, pipefitters and many, many more.  They all agree with Bill Clinton when he says Bill Pascrell is the fighter we need to help advance President Obama’s agenda.  The reality is that when Steve Rothman had the opportunity to engage in the fight against the Tea Party and take on one of the most Conservative members of Congress to try and win back the House and advance the President’s agenda, he chose to pack his bags, move out of his house and take on a Democrat instead.” 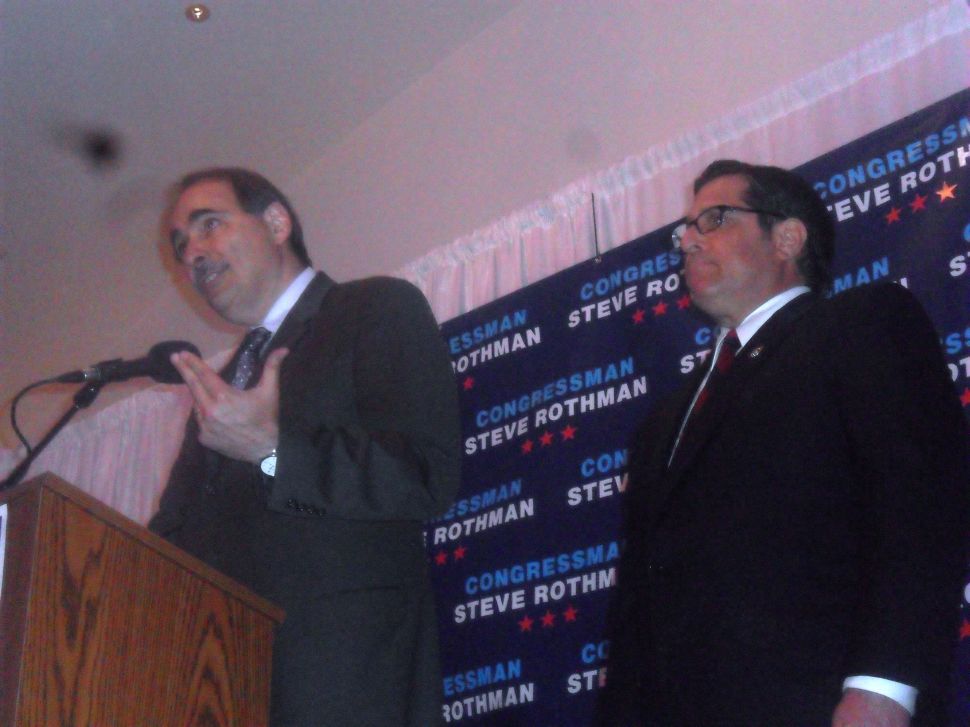