Two days ago, The New York Observer noticed that Renaissance man James Franco had quietly begun blogging for the Huffington Post, adding to his already extensive resume of writer/poet/Ivy League student/film teacher/director/musician/actor/producer/artist. Tackling the issues of New Orleans, haunted houses, and that time he hung out with Nick Cage in a haunted house in New Orleans, we posted the item of interest because, like it or not, James Franco is a Very Famous Person. (Also because we miss his Twitter feed so much.)

But Mr. Franco was not happy with our assessment of his Frank Bruni-esque musings, and called out The New York Observer in his latest HuffPost column for writing about his new gig instead of “covering pressing world issues.”

Mr. Franco, not yet aware of HuffPost’s policy of linking to original articles that they aggregate, quoted nearly half our article about him, before going on to defend his subject choice. (Update: The power of the press! Mr. Franco’s article now includes a link-back.)

Yes, this is all true. I didn’t write about the president’s stance on gay rights — I figured there was enough talk about that already. (Plus, who wants to hear an actor’s take on it anyway?) I didn’t write about Marina, but only because we are doing an episode of Iconoclasts for the Sundance Channel together and I figured everything one would want to know about her would come out then. And yes, I am working on an album with my art school band, but I wouldn’t want to write an article for HuffPost that promotes my own work. Instead, I wrote about New Orleans and ghost tours because I think there is something interesting about the way we are repelled by violence, on one hand, and attracted to it for its entertainment value, on the other. Maybe the great journalists at the New York Observer should stop wondering why I am not covering Obama or Abramovic — and start asking themselves why, instead of covering pressing world issues, they are covering my writing, which they claim to consider petty.

We apologize to Mr. Franco for not mentioning his extensive work with the Sundance Channel.

But it doesn’t end there! To prove that he in no way was affected by our portrayal of the actor as somewhat frivolous, Mr. Franco then launched into a lengthy diatribe about the time he met President Obama and asked him how he dealt with detractors, since their situations are virtually identical.

Because his choice as a commencement speaker was being protested at Notre Dame, and since he wasn’t given an honorary degree after speaking at Arizona State because the officials felt like he hadn’t accomplished enough, I asked him how he dealt with such detractors. He said, “humor.” I tried to take his advice.

For those who don’t remember, James Franco faced a similar problem in 2009 when students at UCLA protested the actor giving a commencement speech as a graduating member of his class. (Possibly because he never attended classes.) Why couldn’t they just give him an honorary degree, like the President received??

In any case, Mr. Franco decided to cancel his speech, not attend the graduation, and blame it on his filming schedule. Then, taking President Obama’s advice, he made a FunnyorDie video mocking his own lack of qualifications as both a student and a speaker.

Mr. Franco’s LongReads Tumblr post then goes on a strange tangent about how hard it is to write commencement speeches, that time he got advice on graduation speeches from Tina Fey, and his very famous appearance at UT Arlington’s graduation, which he reproduced for the Internet because it was so good that no one bothered covering it, except to remark on the ceremony having to be moved indoors due to bad weather.

I hope you all realize how lucky you are to be in this position right now. Looking up on stage, at a man with deep brown eyes, a flawless head of hair, chiseled good looks, staring right back at you. And I’m just talking about Arlington U president James D. Spaniolo!!! (Note: point to Spaniolo) You’re leading the charge, Spaniolo. Great stuff.

In all seriousness, you guys are incredibly lucky. There’s no better feeling than the sense of accomplishment that comes with graduating. It’s such a good feeling that I’ve been chasing it for the last 6 years. I have a BA, a few Masters, and I’m currently pursuing a PHD. Seriously. I think I’m developing a bit of a problem. It’s gotten to the point where if I don’t graduate something within a 6-month period, I start getting the shakes, I break out with hives. I wake up with cold sweats. Cotton mouth is becoming a pesky little issue. So I feel very privileged to be here today just to get a taste of that sweet graduation feeling. If I’m being completely honest, I’m already starting to get a contact high off it. So thank you for that.

That speech (which was drafted by Deenah Vollmer, passed on to Seth Rogen, and apparently written by everyone in Hollywood except James Franco) ended with the audience cheering.

Because nothing says “I have nothing to prove” like a 1513-word Livejournal entry about the time you talked to the President and gave a really great graduation speech. 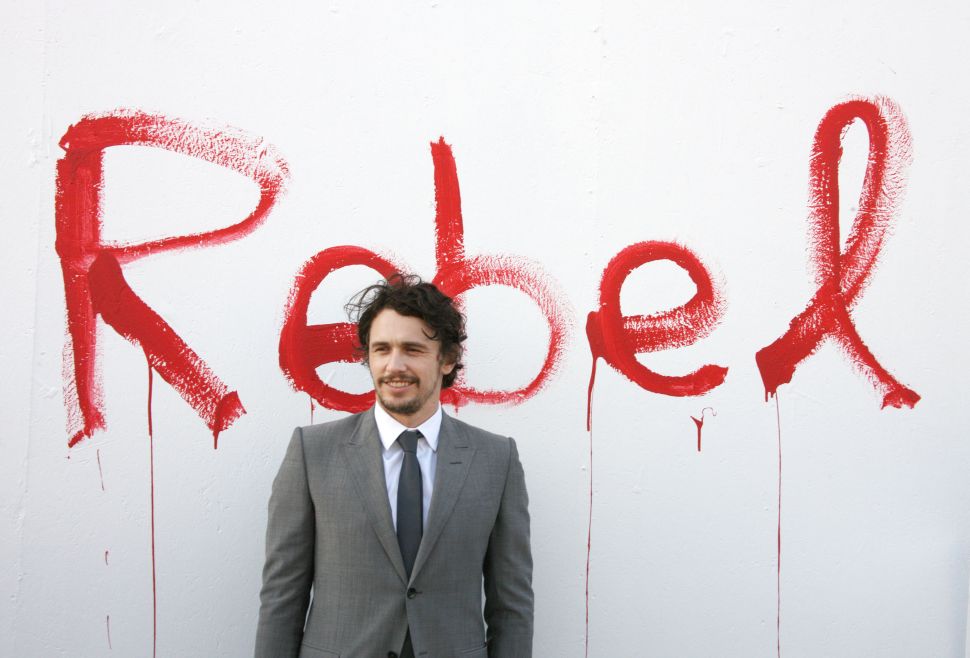