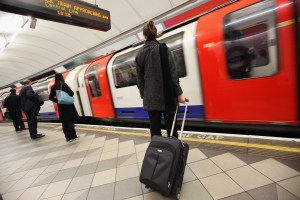 The Art Newspaper today has some news about more art that will be featured at this summer’s London Olympics. Bob and Roberta Smith (no relation to The Times critic) have offered up a piece that will dominate a London Underground station.

From The Art Newspaper:

Who is Community? – a short film and series of paintings on show at Stratford Station – depicts a fictional meeting and romantic encounter on the Central line between the founder of the modern Olympic Games, Pierre de Coubertin, and German political theorist Hannah Arendt.

Mr. and Mrs. Smith (who are, in fact, a single person) join Martin Creed, Anish Kapoor and a handful of other artists in creating works for the Olympic games.