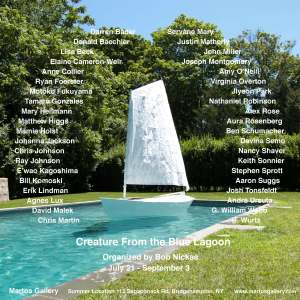 Bob Nickas, curator and Vice columnist extraordinaire, will be returning to Bridgehampton this July to organize the follow-up to last summer’s really great group show, the Bridgehampton Biennial. The show will run July 21 through Sept. 3 at the rented summer home of Chelsea dealer Jose Martos on the South Fork of Long Island. This is the third summer in a row that Mr. Nickas will be curating a show there (which made last summer’s “Biennial” label more than a little tongue-in-cheek), but it will also be the last. The house was sold recently.

This year’s show, called “Creature From the Blue Lagoon,” will feature 40 artists. Like last year, the work will be strewn about the yard and installed throughout the entire house.

“There’s quite a few people who are returning,” Mr. Nickas said, “but I’ve brought in a lot of new people, a lot of young people. There’s just always new artists. You know, it’s New York. Room had to be made.”

Among the artists that were included last year are Lisa Beck, Ryan Foerster (who was also recently the subject of a solo show in an empty lot in Miami that was curated by Mr. Nickas and presented by Mr. Martos’s Shoot the Lobster project space), Chris Martin, Ben Schumacher, Davina Semo and Aaron Suggs. Last year, Mr. Suggs built an all-white sailboat that floated in the pool in the backyard. He’ll reprise that project this year, only the boat will be covered in printed photographs that the artist took of the boat floating in the pool last year, which will serve as a kind of camouflage. A lot of those returning artists, especially Mr. Foerster and Mr. Schumacher, have seen their careers take off since last year’s show. (“I feel like we’re kind of a year ahead of people in terms of showing artists,” Mr. Nickas said.)