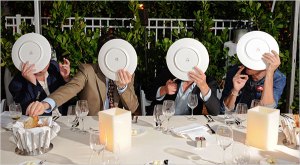 Artnet’s Rachel Corbett reports that the Bruce High Quality Foundation will open a show at Aby Rosen’s Lever House in Midtown Manhattan at the end of June.

The show will consist of three pieces, all of them detailed over at Artnet but here’s a sample:

Of the three works in the show, which is officially presented by Vito Schnabel and titled “Art History with Labor,” the most salient reference for contemporary viewers is probably the 12-foot-tall cast bronze rat replica of the blow-up “scab rats” often stationed at labor protests. Its title, The New Colossus, obviously refers to the Emma Lazarus poem engraved at the base of the Statue of Liberty.