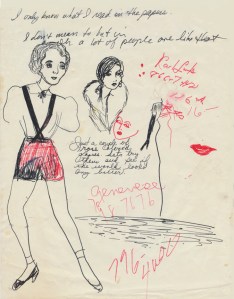 Tomorrow evening, the Clayton Patterson Gallery & Outlaw Art Museum on the Lower East Side will open the exhibition “Candy Darling: Drawings & Musings 1969/1972.” The show features works by Candy Darling, the late transgender artist and muse of Andy Warhol, Lou Reed and Salvador Dalì. The show will consist of 17 drawings along with photographs and a large painting from Darling’s estate, the only one she ever created.

In 2009, Jeremiah Newton, a close friend of Darling’s and the executor of her estate, donated the last of two installments of a large archive of Darling’s work including diaries, letters and photographs, as well as Darling’s cremated remains, to the Andy Warhol Museum, in Pittsburgh.

“I didn’t think I had anything anymore,” said Mr. Newton during a phone conversation with Gallerist this morning. “But it turned out I did.”

Since he donated the Candy Darling archives, many people have been asking Mr. Newton if he has other works by Darling for sale. “A new generation,” said Mr. Newton. “These are people in their 20s and 30s who weren’t alive when Candy was alive.” These drawings, each of which is original and one-of-a-kind, are from Darling’s journals that are separate from the work donated to the museum. They will be on sale from $700 to $1,000.

Darling, who was born James Lawrence Slattery in 1944, moved to the West Village from Long Island in the late 60’s where he reinvented himself as Candy Darling, a glamorous woman who became one of Andy Warhol’s superstars, starring in several of his films and regularly holding court at Max’s Kansas City. Mr. Newton lived with Darling in Manhattan and Brooklyn until her death in 1974, from Hodgkin’s lymphoma. He produced a documentary about Darling’s life, Beautiful Darling: The Life and Times of Candy Darling, Andy Warhol Superstar, which premiered at the Berlin Film Festival in 2010 and starred Chloe Sevigny reading from Darling’s journals.