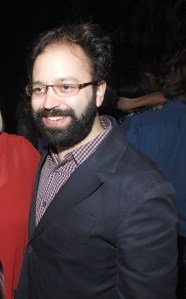 A newly endowed curator position at the Carnegie Museum of Art in Pittsburgh bears the name of the Guggenheim Museum’s director, Richard Armstrong, who served as director of the Carnegie from 1996 to 2008.

The Pittsburgh Post-Gazette, which shared the news today, reports that Dan Byers, who previously served as the Carnegie’s associate curator of contemporary art, will be the first Richard Armstrong Curator of Modern and Contemporary Art. Those are some big shoes to fill, Mr. Byers. Mr. Armstrong curated a number of Whitney Biennials and is also really tall.

Mr. Byers, who is co-organizing the 2013 Carnegie International, is a graduate of the Center for Curatorial Studies at Bard College.

For his part, Mr. Armstrong, who will be fêted at a reception at the Carnegie today, released a classy prepared statement: “I am personally honored to be associated with this new position, and I bow to my director and curatorial predecessors as well as the many donors whose combined efforts make the collection so distinguished.”