Self-professed Tea Partier Ernesto Cullari liked Anna Little back in 2010 and counted himself a supporter and soldier.

A professional judge of talent, Cullari didn’t mention Little’s incessant impromptu singing in front of captive audiences souring him on the Highlands fireplug.

“What I saw was a candidate unwilling to go after (incumbent U.S. Rep. Frank) Pallone – like the fact that he got his wife a job at the EPA where she works while most people suffer an economic downturn,” Cullari said. “Frank Pallone and a slew of other leaders have been looking out for just themselves. I’ll make that case. I’m not ashamed to make it.

“What I witnessed in Anna was someone deeply focused on herself instead of the task at hand – namely advancing the small government ideology,” he added. “She missed that opportunity.”

Owner of his own talent discovery business, the 40-year-old from Asbury Park said he was fine literally dancing the tango with an Argentinean woman before making his decision to run in the Republican Primary for the right to take on Pallone in the 6th District General Election.

He can happily go back to that, he says, but in the meantime, he plans to go to Congress, and has no trouble defining himself as the conservative in a matchup with Little.

“When Anna was in office she raised debt by 30 percent,” Cullari said. “It’s very hard for me to understand how one can call oneself a conservative when they have a history of raising fees and taxes. You can’t expect to raise government productivity when the weight of government is around your neck. We’ve reached a point where it’s just obvious.”

He’s never held elected office, but he sees that as a plus in this environment.

If elected, the Republican said his primary concern is to help people get back to work.

“I know many people, friends, who are unemployed and looking for work, and some have been at it for two or three years,” Cullari said. “Something happens to you mentally when you can’t find work for that long. You can become demoralized. I don’t think it’s controversial to say corporations and individuals need tax cuts. We need a corporate tax cut. If we have the most aggressive tax cuts in the world we would have companies repatriate.”

With less than three weeks to go in the GOP Primary, Cullari is running against Little with the backing of the Monmouth County GOP Organization. Little has support from the Middlesex Republicans. 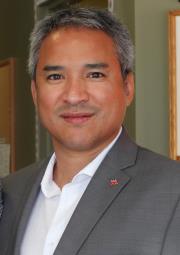