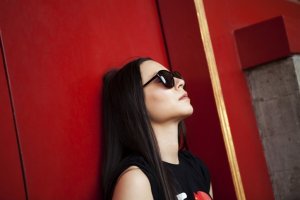 China Chow, the co-host, with Simon de Pury, of Bravo’s Work of Art: The Next Great Artist, has a brief interview on Nowness in which she opens up on the occasion of her stint on the cover of Vogue China.

Ms. Chow, who is the daughter of restauranteur Michael Chow, fondly remembers “the night that my father threw an incredible party to celebrate bringing the Beijing Opera to Lincoln Center in New York City.” Her grandfather was Zhou Xinfang, the renowned opera performer whose likeness appeared on a Chinese postage stamp. She also relays a story in which she investigates the rumor that she was the cousin of Chow Yun-Fat.

And of course, being surrounded since childhood by art world elite, her current role as co-host of an art show seems only natural. Her early inspirations?

“In particular, those who were around the most really made an impact on me: Jean-Michel Basquiat, Keith Haring and Andy Warhol.”