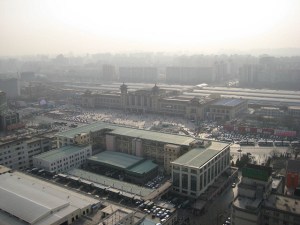 Just in time for the start of the Art HK fair in Hong Kong, which will soon be rechristened under the Art Basel name, Bloomberg has details on the arrest of German art shipper Nils Jennrich in China on allegations that he helped underreport the price of artworks being imported to help their owners avoid some $1.6 million in taxes.

As the wire service notes, the import duty and value added tax in mainland China is a hefty 23 percent, meaning that there is plenty to be gained by fudging the value of works. (There are no such duties in Hong Kong, making it a rather attractive place for many international art dealers to do business.)

Many of the details of Mr. Jennrich’s case are, as of yet, unavailable, though he is said to face a maximum punishment of life in prison. He was apparently picked up at the end of March and has been held since then while authorities investigate the case.

According to one expert interviewed by Bloomberg, it is fairly common for Chinese collectors to understate the value of works they import. That expert told the service: “This will have a big impact on Chinese who are buying expensive art abroad….They’ll be inclined to hold it overseas for longer because they don’t want to pay their taxes and because it’s become dangerous.”